Councillor hits out at ‘idiots’ after disgusting sectarian attack on home 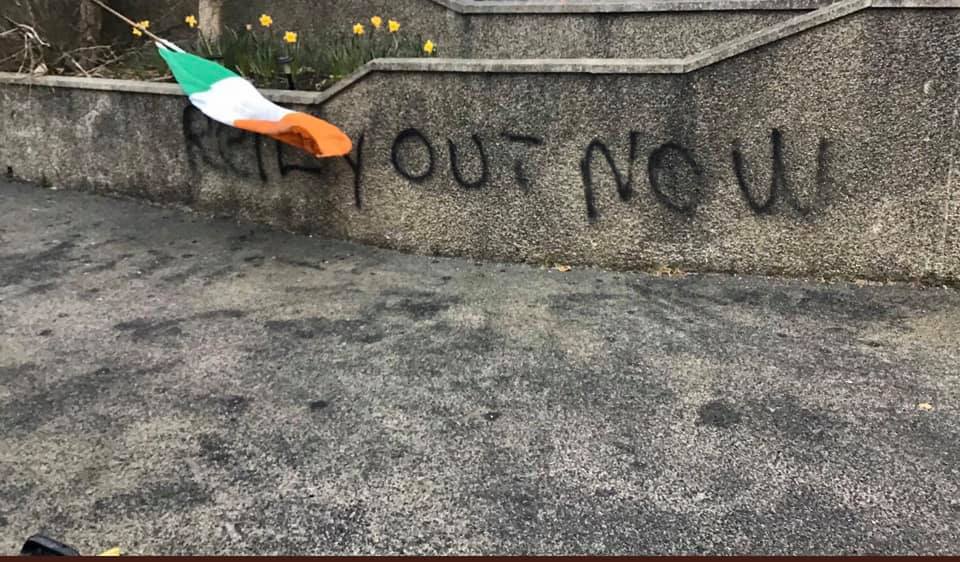 A unionist councillor has hit out at the “idiots” responsible for a sectarian attack at his Co. Down home.

An Irish tricolour was also left flying on the wall.

Councillor Reilly, posting the image on social media, said: “In the middle of all that’s going on, some idiot decorates our drive way.

He added: “Flag’s in the bin but has anyone got graffiti remover I could borrow.”

“I want to offer support to my friend and Unionist colleague Henry Reilly following this disgusting attack at his home,” said councillor Taylor.

“Henry is the second Unionist politician serving on Newry, Mourne & Down District Council to be threatened in a matter of weeks.

“The Unionist minority collectively on the Council will continue to provide a strong voice for Unionism in the area despite such acts of intimidation and I know this action will not deter Henry from continuing to serve all the people of the Mournes.

“We all have enough to be dealing with at the moment without having to contend with sectarian low life’s stirring up tensions in the local area.”

SDLP group leader Pete Byrne said his party are disgusted at this sectarian attack on one of their fellow Councillors.

“This is the second public attack we have seen on a unionist councillor in our district in a matter of weeks and is completely unacceptable,” commented councillor Byrne.

“At a time when everyone is working together to protect each other through very difficult times, certain people feel the need to attack the homes of those with whom they have a differing view.

“Instead of telling people to go home, they need to need to wise up and stay at home themselves.

“The SDLP work respectively and constructively with all unionist councillors on the Council and will continue to do so.

“I will be contacting Councillor Reilly this morning to offer our full support at this time.”