Assault rifle, pistols and machine guns ‘most significant firearms find in NI in a decade’ 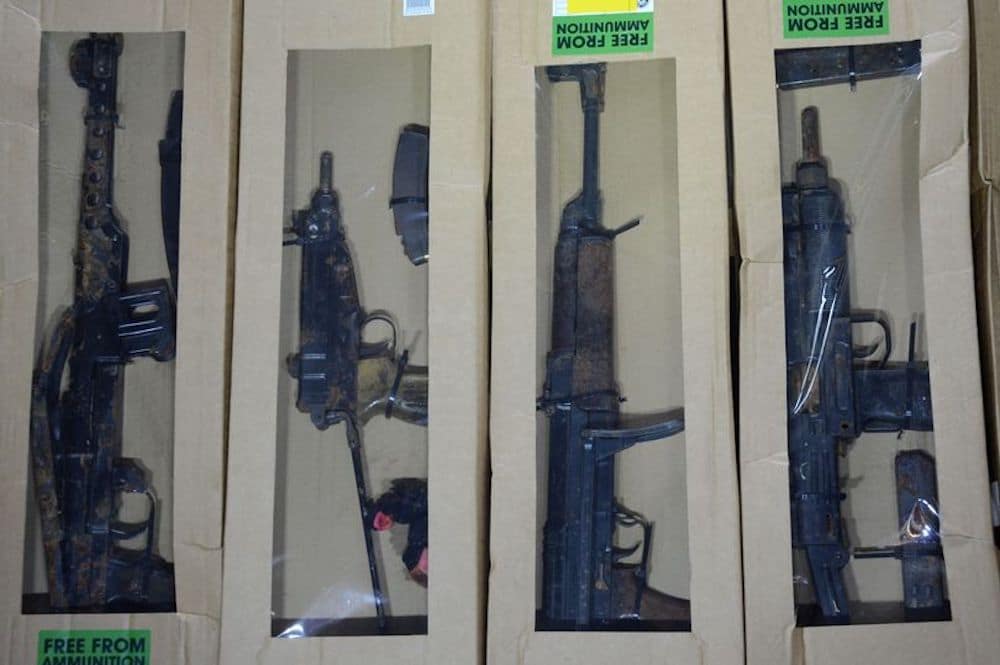 Eleven firearms, including hand guns, machine guns, machine pistols and an assault rifle have been recovered in Jerrettpass in a National Crime Agency operation.

The search, part of an NCA investigation into organised crime, supported by the Police Service of Northern Ireland, commenced around 4pm yesterday afternoon in a rural area outside Newry.

During the search, officers found a waterproof holdall buried into the ground. Once opened, the bag was found to contain three hand guns and four machine guns.

Working in adverse weather conditions, the dig continued in the same area and a second almost identical holdall was discovered which contained a rifle and three machine pistols.

Weapons found had magazines attached and a quantity of ammunition was recovered.

The search continued into the night with the assistance of PSNI search specialists and equipment.

David Cunningham, NCA Branch Commander, said: “This is a major success against those involved in serious and organised crime which we undertook with the support of our partners in the Organised Crime Task Force”.

“We believe that this is the most significant find of serviceable firearms and ammunition in the area in 10 years, they appear to be in good condition and ready for use.

“Our investigation continues, part of which will include a detailed forensic examination to identify those who have handled the weapons and to determine their previous use.

“These types of automatic weapons are used by serious organised criminals to kill and cause serious harm and we are convinced that this seizure will prevent future loss of life.

“Working with PSNI and other partners during this operation has been key to this success and we will continue to bring all of our shared expertise to bear in bringing those involved to justice.”

He said: “This very clearly shows the criminality that is bubbling under the surface in Northern Ireland and the resources at the disposal of organised criminals.

“I welcome this operation by the NCA and it certainly proves just how vital an organisation the National Crime Agency is and how important its role is in Northern Ireland.

“It is worth remembering that the operation of the NCA in Northern Ireland was opposed for some time by Sinn Fein and the SDLP and when you understand the work the NCA is involved in, busting organised criminal networks, there can be no doubt as the necessity of this important UK anti-crime agency operating deeply in Northern Ireland.