Councillor hits out at 'shameful and sickening' attack 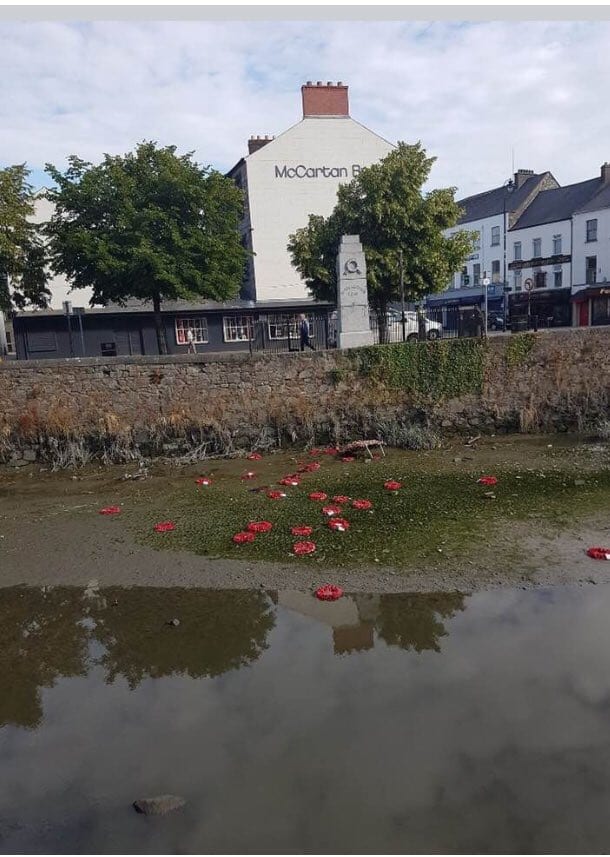 There has been anger and outrage after Newry Cenotaph was targeted overnight.

Several dozen poppy wreaths commemorating those who died in the First and Second World Wars were removed.

The culprits threw them into the River Clanrye.

The incident is believed to have happened late last night or during the early hours of (Saturday).

The sight of wreaths floating in the river and others washed up on the bank greeted people this morning.

They have now been recovered and are back in place on the Cenotaph.

The incident has prompted cross-party comdemnation.

He said: “It is shameful and sickening to see a Cenotaph targeted in this manner by those determined to cause division within our local community.”

Cllr Taylor added: “Not less than a week after poppy wreaths were desecrated at Narrow Water, we now have the occurrence of the same despicable action at Newry Cenotaph.

“The local community are understandably disgusted at this incident and are very clear that the perpetrators of this shameful act do not speak for the vast majority of citizens in Newry.

“This was reflected in the fact that members of the local community assisted with the retrieval of the wreaths from the river.

“There are still some unfortunately who are determined to try and cause division, driven by a narrow sectarian mind-set and it is sickening to see a Cenotaph targeted in this way as they pursue their warped agenda.

“I would appeal to anyone with information on this hate crime to report it to police immediately to ensure that those responsible for this heinous action are brought to justice.”

Newry and Armagh Sinn Fein MLA Conor Murphy also condemned those behind the incident and appealed to anyone who knows anything to come forward.

Mr Murphy said: “This criminal act at the Newry Cenotaph is wrong and I condemn it. There is no place for attacks like this in our society.

“Monuments and memorials are important places of commemoration and remembrance within  communities and should be respected.

“Those involved in these criminal acts need t  be apprehended and face the full rigours of the law.

“Anyone with information in relation to this criminal act should contact the PSNI.”

DUP Newry and Armagh MLA William Irwin branded it “another hate-filled sectarian attack” on the war memorial and wreaths in Newry.

“It follows on from the regular attacks on the Narrow Water memorial wreaths and it is so distasteful and sickening to see that there are those out there who obviously take delight on causing hurt, distress and offence,” he added.

“It is also certainly worth remembering that the people they are disrespecting by these hateful actions paid the supreme sacrifice in protecting the nation and preserving democratic freedoms for everyone.

“Hopefully those behind this latest attack can be brought before the courts and I would appeal to anyone who may have witnessed anything to contact the PSNI immediately.”

Anyone with information can contact the PSNI in Newry and Mourne on the non-emergency number 101.