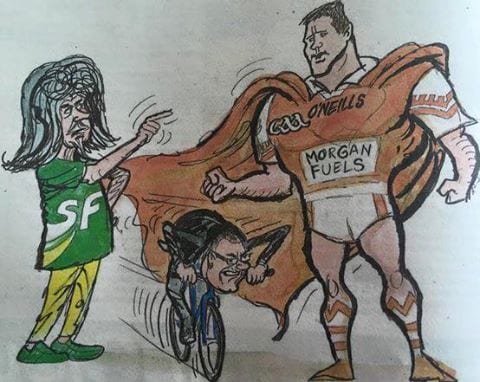 With three days left until the people of Armagh and Newry take to the polls in the 2015 Westminster Elections, is there change in the air?

The SDLP’s Justin McNulty looks the likeliest candidate to overturn the 8,000+ majority Sinn Fein’s Conor Murphy won by in 2005, but there is also a debate for UUP’s Danny Kennedy pipping both men at the post.

And with the ‘First Past The Post’ voting system (FPTP) in place, there is room for some tactical voting- it’s one of the reasons the Unionist pact was agreed upon.

The FPTP system simply means, the candidate with the most votes wins. So, with the DUP and UUP both running in a constituency with a large Sinn Fein majority in 2010, the likelihood of either party overturning that this time around was unlikely at best, however, things have changed.

The DUP have taken themselves out of the running, allowing Danny Kennedy a free market and with it, more unionist votes – probably! But will that be enough? He will be hoping for a relatively strong SDLP performance, to reduce the deficit enough, to allow the UUP to leapfrog both parties. Unlikely though this outcome is.

Many see Sinn Fein’s Mickey Brady as a shoe-in for this seat and with twenty years of political and social experience behind him, it’s hard to look beyond that consensus.

Nonetheless, the SDLP have thrown the kitchen sink at this race, catapulting former All-Ireland winner Justin McNulty into the running for a seat in Westminster – a seat they say he will sit in.

Despite being a party member for years, McNulty has very little, or pretty much no, political clout but that hasn’t stopped the SDLP going full steam ahead to reclaim a once safe constituency seat held by the formidable Seamus Mallon. They feel, with McNulty’s age, his background and apparent willingness for change of some sort, that he is the man to lead the people of Newry and Armagh for the foreseeable future. With no major defining policy or track record, it is understandable the people remain a little sceptical. However he is making waves in the constituency and looks to sticking around regardless of the outcome later this week which is why Sinn Fein have started paying a little more attention. At first Brady was keen on ignoring him. When asked by Armagh I whether or not he saw McNulty as a threat, he simply replied with “No!”

Things have changed in recent weeks; the knives have been brought out with Sinn Fein accusing McNulty of running away from a live online election debate. McNulty refuted those accusations and Kennedy remained quiet.

It remains to be seen whose ‘facts’ are in actual fact, fact, but it is clear that Sinn Fein see McNulty as a viable threat – even if they claim otherwise.

Last week the Irish News depicted the pair bickering while Kennedy raced through on his bike – the proverbial hare and tortoise fable but not at all inconceivable.

Elsewhere, the chances of the Alliance’s Kate Nicholl or Conservatives Robert Rigby winning – even collectively tallying their votes – are as close to zero as you could possibly get. And with the FPTP system, a vote for either, would have to be considered a wasted vote.

Anyway, Brady might win by a landslide, McNulty might do the improbable and Kennedy might pulled off the impossible but one thing is for sure, your vote will count come May 7. This will be one seat to keep a very close eye on.

Why not take our just for fun poll: