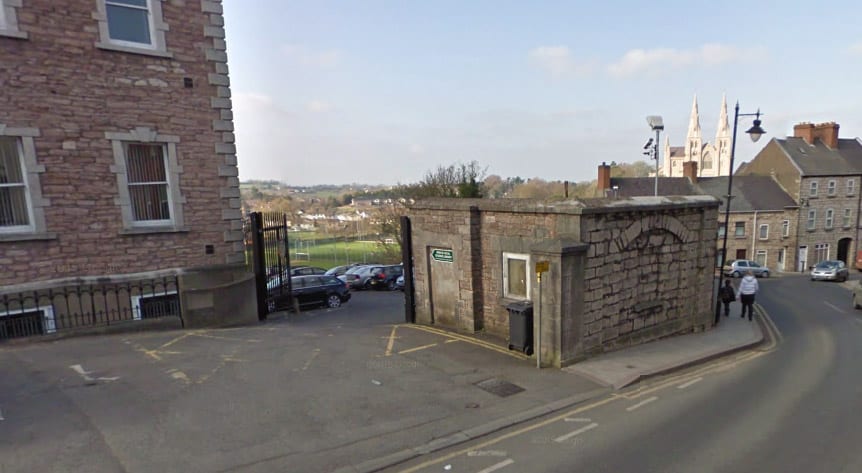 A famous Armagh landmark is to be demolished – and rebuilt stone by stone!

The old porter’s lodge at the former Armagh City Hospital has, sadly, been looking worn and tired for many years now.

And large parts of the perimeter wall surrounding the old infirmary have also fallen away and crumbled into disrepair.

But now Armagh I can reveal that a major repair scheme is in the pipeline which will give the historic site a much-needed facelift. The old City Hospital was designed by George Ensor and constructed in 1774, on the former home of Thomas Dawson, Burgess of Armagh, who gave his name – quite obviously – to Dawson Street.

The porter’s lodge sits to the top of Dawson Street/Abbey Street and, of course, generations of young people have enquired of its use.

It was, as the name suggests, the home of the porter who tended to the City Hospital.

It appears, at a glance, as if a bricked up window protrudes up out of the ground.

Sadly, while something of a famous site in the city, it is now in a state of deterioration.

But plans will be advertised shortly that will see it restored and preserved for future generations.

A planning application will be advertised shortly for public consultation which would, if approved, allow for the building to be demolished.

It would then be reconstructed – very carefully, brick by brick – and moved slightly back!

That would allow a slight widening of the footpath at the top of Dawson Street.

At the same time, much of the perimeter wall surrounding the old City Hospital complex – which now houses, among others, the Irish and Local Studies Library and Youth Hostel to the rear – will also be coming down.

Gone will be the security spikes sticking atop the wall.

It will be carefully restored using Armagh limestone – of which the old hospital is also constructed – and rubble salvaged from the dismantled wall.

The remaining section of the wall which will not have to come down will instead be restored.

And that famous blanked window on the porter’s lodge will be reinstated and infilled with metal grilles.

These will match brand new decorative gates – with specially cast railing heads – at the entrance to the complex.

An application for the work is being submitted by Armagh City, Banbridge and Craigavon Borough Council.

The exact cost of the project is not known, but the former Armagh City and District Council had agreed to allocate money towards the scheme as part of its ‘legacy’ spending before being wound up at the end of March.

The completed project will provide a welcome refurbishment of an area that has other ambitious plans in the pipeline.

Armagh I recently revealed money had been secured for the restoration of the Johnston Building at the nearby Shambles Yard, while the old Handel House, one of the Seven Houses at Lower English Street, is also undergoing refurbishment at the present time.

The demolition of the old fire station and construction of the new Culturlann has also been approved.

This new work will be a fine addition to enhancing the appearance of an historic site and saving it from further decline.