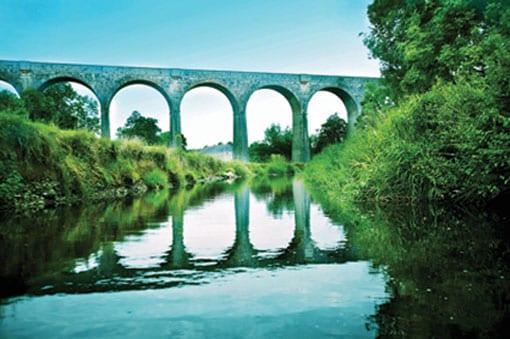 Enterprise Minister Arlene Foster has been asked to locate the new headquarters of the rebranded Tourism Northern Ireland in Newry.

The Minister today revealed details of the Hunter Report, which contains a total of 33 recommendations.

Included is the change of name of the Northern Ireland Tourism Board to Tourism Northern Ireland, and that it is relocated in one shared office with Invest NI from next year.

Minister Foster believes that this closer working relationship between both will have many benefits.

Newry and Armagh Sinn Féin has welcomed the developments and argued that Newry would be the ideal location for such a ‘joined-up’ body.

She said: “Having both of these locations in the same place is a good idea, as it will help coordinate the tourism development strategy until the creation of a single all-Ireland tourism body.

“I have asked the Minister to consider locating the new headquarters of the two organisations in Newry.

“In order to attract more tourists we must market the island of Ireland as a single destination, and Newry, as a border city, is the perfect place from which to coordinate an all-island approach.

“Most visitors fly into Ireland through Dublin or Belfast and Newry is halfway between the two airports and is at the centre of the east coast economic corridor.”

Minister Foster had outlined her intentions earlier today (Tuesday) in a statement to the Assembly.

She said implementation of the review’s recommendations would make NITB even stronger with a new name, new leadership, new partnerships and a new future strategy.

Minister Foster said: “Given the importance of tourism to the local economy, my priority is to ensure that we have the right structures in place to maximise the benefits this crucial sector can bring right across Northern Ireland.

“Northern Ireland has seen significant growth in visitor numbers and, more importantly, in tourism revenue over the last five years. Our challenge is to maintain and build on that momentum.

“The implementation of the review recommendations will be delivered during a period of severe financial pressure on budgets, and it is clear that those recommendations which are designed to increase efficiency through improved integration and collaboration have become increasingly relevant.”

Recommendations in the report include making NITB more client-facing in respect of the tourism industry, together with changes to the structure and name of the organisation.

“Both posts will be crucial in taking forward recommendations and implementing the organisational change programme envisaged in the Hunter Review.

“To signal the start of this important change process I have decided that the name of the organisation should be changed to Tourism Northern Ireland.

“By implementing the Review recommendations, Tourism Northern Ireland will have a much greater presence at local level, developing strong relationships and increasing its knowledge of the needs of local tourism partners.

“This is particularly important given the imminent changes in local government with increased powers for the new councils and their responsibility for Community Planning, including local economic development.

“Collaborative working with the new councils and the establishment of strong partnerships must be a priority for Tourism Northern Ireland in order to maximise the tourism potential of each of the nine Key Tourism Destinations across Northern Ireland.

“The Hunter Report recommends the development of a Tourism Growth Fund jointly supported with the new councils and I will work to establish such a Fund in the next budget period.”

Minister Foster explained: “The review highlights that there is already good cooperation between the two organisations, but points to the need to deepen the existing relationship.

“The joint initiative to develop a Northern Ireland economic brand is an example of the benefits which can be achieved by both organisations working together.

“I agree that the two organisations should look carefully at the opportunity to co-locate when leases expire in 2016, and also they should explore opportunities for the provision of common back office services as current contracts come to an end.

“These issues are particularly relevant in the current budgetary climate.”

She called on Tourism Northern Ireland to lead the way in the implementation of the recommendations from the Hunter Review.

“The Hunter Review rightly highlights the impressive progress made recently in local tourism and the important role played by NITB in the development of new policies, securing the completion of new tourism products,” added the Minister.

“The review also recognises the significant contribution made by the organisation in the recent substantial growth in tourist numbers and revenue.

“In terms of setting the future strategic direction for tourism, I will work with the tourism industry to bring forward a new strategic plan which will coordinate the work of key partners in the industry, and in central and local government.”