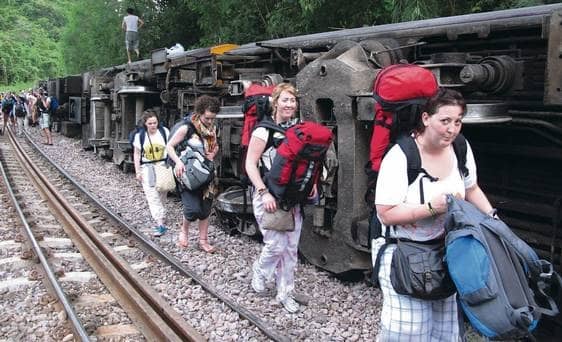 Two young Armagh women had a miraculous escape after a train they were travelling on in Thailand derailed at high speed and flipped on to its side.

The holidaymakers were caught up in the terrifying crash in a mountainous area of northern Thailand in the early hours of Wednesday morning.

They were lucky to escape with cuts and bruises after their carriage careered off the tracks and was flung on to its side.

Armagh teacher Grainne Loughran (27) was travelling with her sister Ciara (21) and friends Faye Rice (21), also from Armagh, and Grace Conway (21) from Derry. The group were on a 20-day summer break when they boarded the overnight train from Bangkok to Chiang Mai.

Speaking to the Belfast Telegraph from their hotel in Chiang Mai, Grainne said they were asleep in facing bunks when they were woken by a loud screeching noise at around 3am.

Grainne, who teaches business studies at Holy Trinity College in Cookstown, and her sister were thrown onto the opposite bunks when their carriage flipped onto its side.

She said: “I heard a lot of screeching before I was thrown out of bed. Ciara was also thrown out and I actually ended up on the roof of our carriage.

“I fell quite a distance. I have a few bruises and a sore neck. We all have minor cuts and bruises.

“The lights cut out which made it really difficult for us to try and climb out of the carriage. It was the most terrifying experience of my life. It was unbelievable.

“It was really difficult to climb out because the train was on it side. We had to climb out over the roof as there were no emergency doors.

“When we finally got out, we realised we were in the middle of nowhere.”

Around 30 of the 300 passengers, mostly foreign tourists, were injured when the train derailed on old tracks – the second derailment on the route in a month.

Seven out of 10 carriages ended up on their sides. Grainne said it was only when they scrambled out of the train that they realised the extent of the damage.

She added: “We realised we were lucky as we could see people being taken off in stretchers. There were people with broken shoulders and noses. We were told to take our passports and money and get out of the train. The heat was unbelievable.

“People were very good, helping each other find luggage and giving out bottles of water. Everyone pulled together.”

She added that the damage to the train was “unbelievable”.

Grainne said: “I could see that we were completely on our side. It was a real shock. It’s still all feels very surreal.

“We were walking along, trying to get away, and all I could see was the undercarriage.

“We were told to stay on the tracks, away from the jungle, as it was dangerous.”

The travellers were eventually taken to Chiang Mai after being checked over by medics.

They are due to travel back to Bangkok by train but say they now don’t feel safe and are trying to find alternative transport.