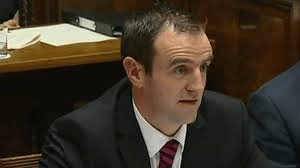 The funding boost will be given to Portadown 2000 to help them purchase the Old Methodist Church and Manse at 26 and 28 Thomas Street, Portadown.

A grant scheme, run by the Northern Ireland Environment Agency (NIEA) has been used to do this. The scheme, the NIEA non government organisation grant scheme, is available to charities to help them purchase listed buildings at risk and conserve their architectural and historic character.

The Minister (pictured) said: “Today’s announcement is a significant boost for Portadown’s built heritage. These buildings have been vacant for a long time but are a hugely important part of the town’s historic building stock. Helping charities to purchase buildings at risk is a key part of our approach to addressing dereliction in city centres.”

The buildings at risk will be repaired and conserved to form a shared space facility encompassing lecture theatre, meeting rooms, office space and various heritage projects.

The Minister continued: “This will be a very public use for these buildings, highlighting the rich architectural heritage of Portadown and contributing to its economic and cultural renaissance. This is what my Department is about, supporting and encouraging the beneficial use of our heritage to realise its full economic and social potential.”

Portadown 2000 is a locally based organisation with an established track record in delivering high quality projects such as the Millennium Court Building and associated retail units which have completely transformed William Street in the town centre.

The former Methodist Church and Old Manse were listed at grade B1 in 1981. They are two out of ten buildings at risk in the Craigavon Council Area. The former church has a strong internal space and a fine classical façade. However, it has been vacant and under used since the mid 1980’s when Thornton Wholesale Food Distributors left the building.

For the last 10 years both these buildings have been highlighted on the NIEA’s Built Heritage at Risk in Northern Ireland register (BHARNI). This register is designed to bring attention to such buildings and encourage their reuse. In 2008 NIEA introduced a grant scheme aimed at supporting charities to purchase such buildings. This is administered by the Architectural Heritage Fund. Available funds vary and are capped at £125,000 per building. Buildings have to be purchased at market value and a business case showing long term viability must be submitted.