Minister to decide on future of Armagh’s railway campaign 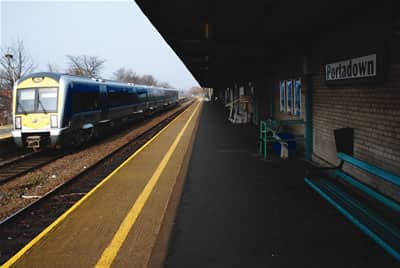 REGIONAL Development Minister Danny Kennedy will decide later this year if the Armagh to Portadown rail link is to be reopened.

The results of a major consultation exercise on the future of Northern Ireland’s rail network are now in and it is now time for decisions.

An Armagh-based lobby group gathered thousands of signatures seeking the reopening of the line, as Armagh remains to this day the only city in the whole of Europe without access to rail transport.

But the early indications are that the majority of those taking part in the consultation were in favour of investment in the existing network, as opposed to the creation of new routes.

Most stakeholders that voiced an opinion on the preferred strategic direction of rail spending in the region prioritised the maintenance of tracks and rolling stock ahead of other options, such as enhancing cross-border links or electrification of the system

A “significant number” of the individual or group contributors to the consultation did identify the building of new or the reopening of defunct routes as a priority.

The majority of those in favour of extending the network wanted to see tracks laid in Fermanagh, Armagh and Tyrone, with particular support for reopening the Portadown to Armagh link.

The exercise to gauge public opinion was undertaken by Minister Kennedy as he maps out the future of Northern Ireland rail to 2035.

A total of 119 stakeholders contributed, including private individuals, politicians, local authorities and organisations representing the interests of business and industry, community groups, older and disabled people and consumer groups.

Mr Kennedy, an Ulster Unionist MLA for Newry and Armagh, is now tasked with making some difficult decisions.

He said: “I am absolutely committed to improving our railways. The range of responses received to the public consultation and the variety of positive preferences expressed is an indication of the wide interest and strong support for future railway investment.

“The challenge for me will be securing Executive financial support for Northern Ireland’s future transport needs, taking account of best value for money.”