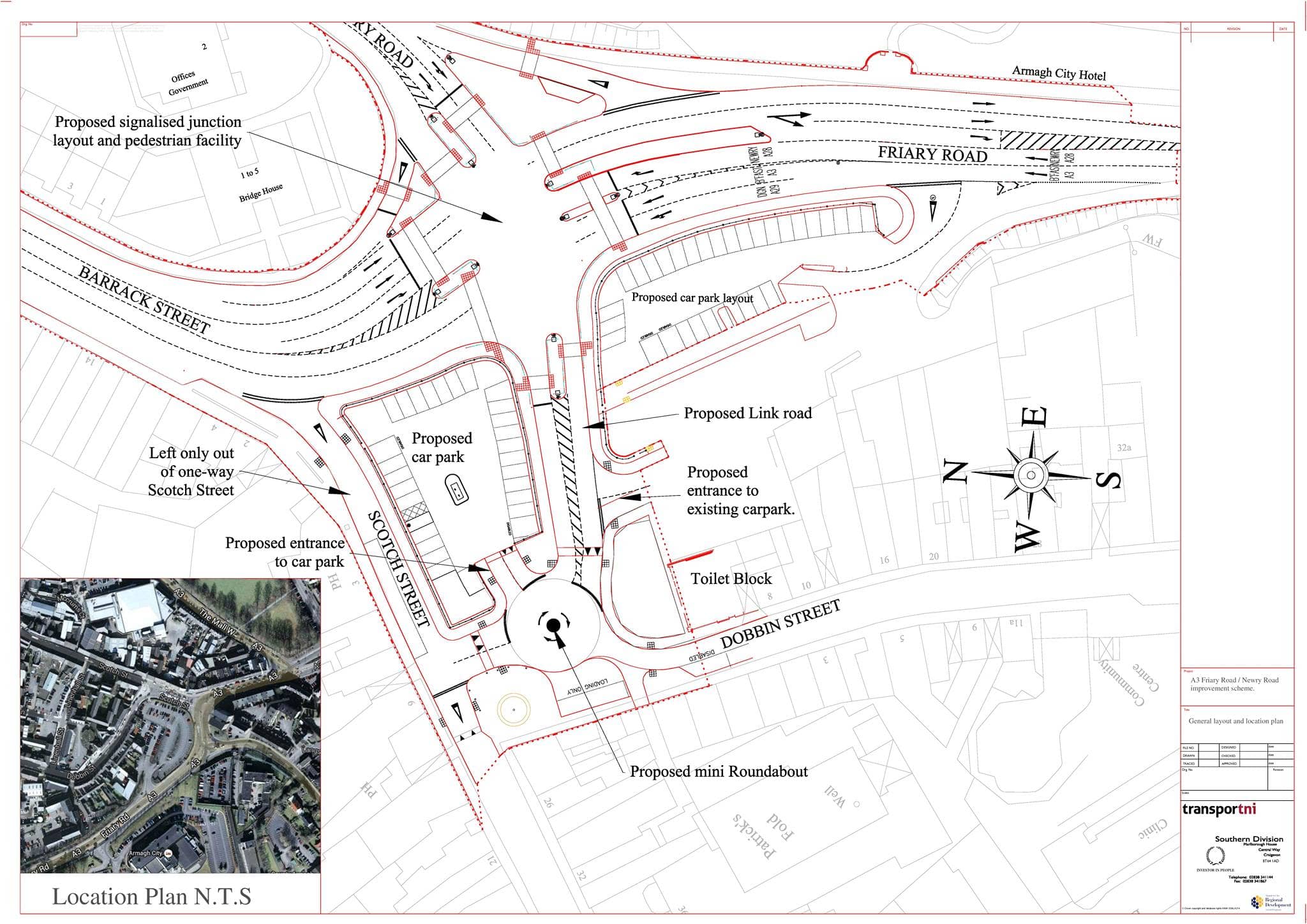 An Armagh businessman has described as “misleading, confusing, unhelpful and inaccurate” local media reports this week that the junction at the bottom of the Newry Road is to be replaced with a roundabout.

The report comes more than a month after Armagh I exclusively revealed the new plans, which we have obtained a copy of, which are being proposed to improve traffic congestion in the city centre.

And, when we contacted the Department for Regional Development, a spokesperson confirmed our initial exclusive, which would see a mini roundabout introduced at the bottom of the steep incline at Scotch Street.

There are NO plans in place to have a roundabout located at the bottom of the Newry Road.

Instead, the spokesperson told Armagh I: “The proposed improvement of the Newry Road/Friary Road Scotch Street junction will see the significant upgrade of the existing traffic signal controlled junction.

“The proposals will result in two lanes of through traffic in each direction, plus right turning lanes on the main Friary Road into Newry Road and the new access to Scotch Street.

“In addition, there will be left slip lanes into and out of the Newry Road junction.

“It will also allow two lanes of traffic to exit the Newry Road and provide a new access road into the city centre. This new access road will connect into Dobbin Street, at a mini roundabout, which will better control traffic movements in this area.

“Access to the Friary Road car park from the city centre will be via the new access road.

“It is anticipated that scheme delivery will result in improvements to traffic progression, pedestrian access to the city centre and improved road safety for all road users and is supported and part funded by Armagh City and District Council.”

It has been confirmed that some 70 car parking spaces will be lost at the Friary Road car park to facilitate the development.

But again, as we revealed in August, a central bay of car parking, consisting of some 30 spaces and two disabled spaces, will be located in the raised central reservation directly in front of Johnstons Bakery, to curtail the impact.

A planning application for the work was submitted last month, but no decision has yet been made.

But, subject to approval being given, the spokesperson confirmed the intention to begin work early in January 2015, on a scheme which will take almost three months to complete.

The spokesperson added: “This work will complement the recently completed upgrade of the Friary Road/Dobbin Street Lane junction and represents an investment of around £800,000 in improving road infrastructure in Armagh.”

One Barrack Street businessman, who asked not to be named, told Armagh I conflicting reports emerging this week had been “misleading, confusing, unhelpful and totally inaccurate, causing traders and people living and working in the city great concern”.

He told us: “I have to admit when I read your story last month I had my reservations about the scheme and went to examine the plans for myself and, on closer reflection, it just could make a difference, once the original disruption of the work is out of the way.

“Then I read this week that a new roundabout was being planned at the bottom of the Markethill Road to replace the junction there and I thought this is never going to work – it would be like something resembling Craigavon, one roundabout after another.

“I contacted Armagh I to see if there had been any change of plans or additional proposals coming forward and I am glad to hear that what I read was total nonsense.

“I, and I know other people, were getting concerned that a new proposal was being pushed through that would have led to all sorts of chaos but thankfully that’s not the case.

“I’m glad to see there’s not going to be a roundabout in front of the police station, or anywhere near the entrance to the Markethill Road for that matter, and that the junction there is going to be improved and not replaced as was reported.

“It gives more peace of mind now and I actually looking forward to seeing work start. Maybe this is just what Armagh needs.

“I’m glad you’ve been able to set the record straight and dismiss the rumours and speculation reported this week.”

A major new road scheme aimed at alleviating congestion at the bottom of Scotch Street and the Newry Road in Armagh has gone to DoE Planning Service for approval, Armagh I can exclusively reveal.

The works – which would cost in the region of £800,000 to complete – would involve the creation of a new mini roundabout where Scotch Street meets Dobbin Street, situated at the bottom of the steep Scotch Street incline.

The plan would include removing part of the Friary Road car park, with a flagged paving area in front of the new Dobbin Street toilet block. The roundabout would be located directly in front of this.

With the road therefore widened, this would allow for a central square area of car parking there instead – for in the region of 30 spaces, including two disabled – in the area currently occupied by the raised pedestrian platform directly in front of Johnston’s Bakery.

The new car parking area would be bordered by new granite paving, in keeping with the rest of the city centre’s streets, improved some years back as part of the public realm scheme.

The entrance and exit to this new park would feed directly into the new roundabout.

Also included are TWO lanes of traffic coming into Armagh from the Newry Road, instead of all traffic currently filing through in one lane. The separate turning lane at the bottom of the Newry Road on to Friary Road remains.

Of the two lanes from Newry Road, the right hand one would be specifically for turning in the direction of Barrack Street only, while the left would be for traffic travelling in to the main city centre but will also accommodate Barrack Street traffic.

The plans also include for new pedestrian crossing facilities in the area.

An application has been submitted by the DRD Roads Service’s Southern Division and those living in the area informed.

It is for the “realignment and provision of additional lanes, provision of controlled crossing facilities and new access to Scotch Street”.

It will be formally advertised to the public next week and will be open then to the standard two weeks consultation before Planning Service makes a decision.

A Roads Service consultation document supporting the scheme and forwarded to Planners found “no issues of concern” with the proposals. It was received by Planning Service just four days ago.

The junctions in this area have long been a source of annoyance, with many complaining that the timing of the traffic lights exiting Scotch Street on to Barrack Street only allow two or three vehicles away at a time.

The proposed works are the latest in a series in that general area, following on from road junction changes, traffic signalisation and lay-out further along the Friary Road in the area in front of the Palace gates.