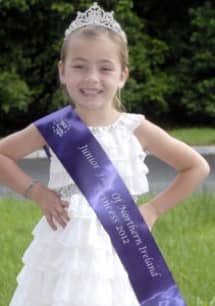 AN Armagh girl is enjoying her moment in the limelight after walking off with the title of ‘Junior Face of Northern Ireland Princess’ 2012!

Megan McQueen scooped the crown and prizes after months of preparation and waiting at a special final function in Newry’s Canal Court Hotel.

The six-year-old had to wear three different dresses for the final, raise money for charity and give an interview – in true pageant fashion!

“She was very pleased and very excited,” said proud mum Gail. “She hasn’t stopped talking about it.”