Alastair, who lost both parents last year, raised over £3,000 for the Children's Heartbeat Trust when he completed the challenge on the first anniversary of his father's death 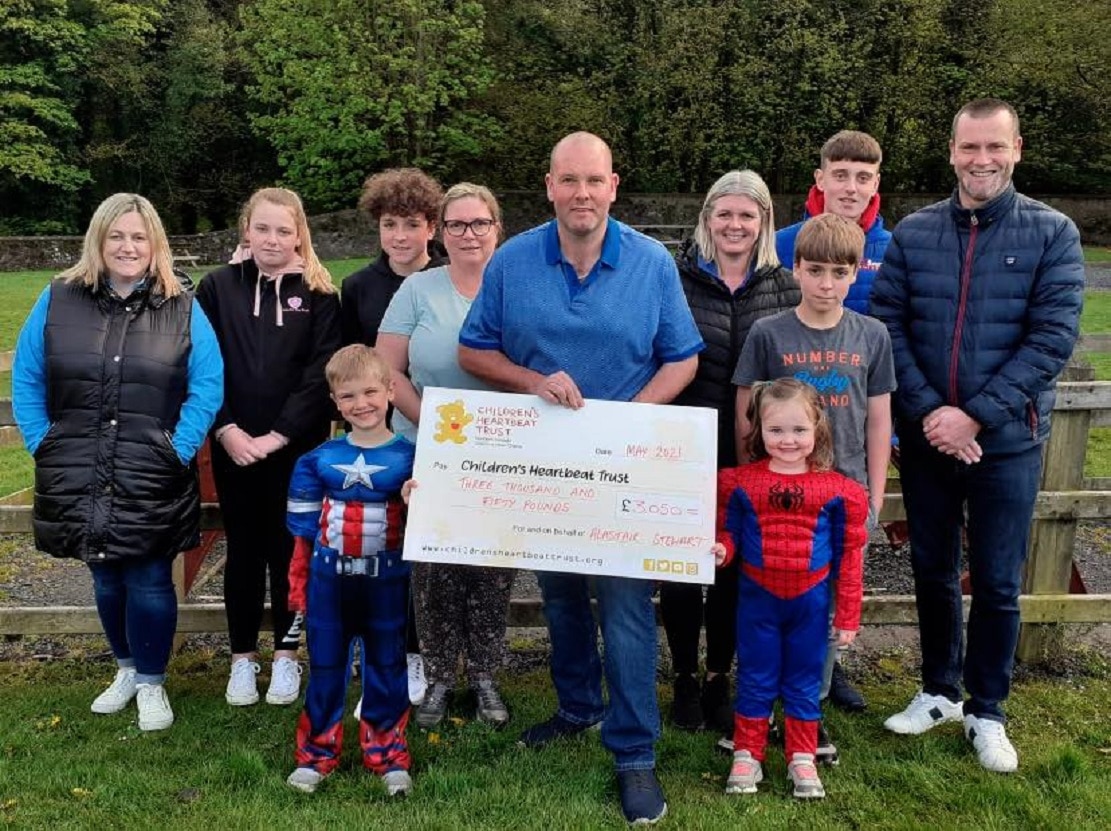 A Markethill man who lost his parents last year has raised over £3,000 for charity after a mammoth tri-marathon challenge which he completed on the first anniversary of his father’s death.

Alastair Stewart completed the total of three marathons in the space of last month – in between journeys across the country as a lorry driver – in aid of the Children’s Heartbeat Trust.

His father, John, passed away of a suspected heart attack last April, just 15 weeks after he lost his wife, Libby, after a short battle with cancer for the second time.

Speaking to Armagh I, the 42-year-old said that he felt that he just needed to do something to mark the first anniversary of his father’s death.

“Dad was an honorary member of Laurelvale Cricket Club due to his fundraising. He would have fundraised for everything and anything.

“I want no illusions here though, he never played a game of cricket in his life,” joked Alastair.

John, his father, regularly put on big barbecue events at the cricket club in order to raise money for all manner of charities.

“They must have raised thousands, ” said Alastair. “My cousin has spina bifida. He  would have fundraised a lot for spina bifida and got him an electric scooter, but that’s going back 40 odd years.”

Alastair commented that his mother’s funeral had been attended by around 700 people but come April following his father’s passing it was a much quieter affair.

“With my mother’s funeral, the minister said he had never seen anything like it and my father’s would have been the same but for the fact he died in the midst of the pandemic,” he said.

“It was only close family. We couldn’t even carry the coffin. People did line the procession but they couldn’t be at the grave or anything because of restrictions.”

Alastair explained that his initial plan had been to revive the barbecue tradition at the cricket club but this was not possible due to the current restrictions.

“Jamie Stevenson took over the cricket club. He would have know my dad for years. Whenever the whole thing opened up last year, me and the family all called down,” he said.

“I asked him about whenever the first anniversary of dad’s passing came, could we bring back the barbecue? Obviously I thought we would be able to, he said yes but just kept going on.”

Once that was scrapped, Alastair had to come with a new way to raise some funds and mark his father’s life.

“I had been doing a bit of running,” he explained, “I lost a bit of weight at the start of the year. I was doing 60 miles a month regularly and I just decided I think I could push this to 76 miles.”

However, it was not all plain sailing for Alastair as just one week into the challenge injury hit.

“I was in a lot of pain. I could barely walk,” he revealed. “So I went to have it looked at with a girl who massaged it and explained that it was shin splints.

“Never had them in my life and it was so painful but I just thought to myself if I have to crawl this distance I will.”

Alastair also had to consider which charity to raise money for and explained that he chose Children’s Heartbeat Trust after speaking to relatives.

“My sister’s sister-in-law’s young fella had a heart operation when he was young and she told me all about what they did for her,” he said.

“They sort out flights and accommodation for the parents to travel for operations as there is nothing there for heart surgery on kids…they just make it so the parents only have to worry about the child.”

After a chat with someone from the charity about what his money would go towards, Alastair was convinced.

“April 27 was dad’s anniversary, it was a Tuesday, and I knew I would be in Wexford, so I said to the family sure we will all go to Gosford on Sunday,” he explained.

“I ran everything but the last mile and then we all did that as a family together, with a bit of a barbecue after to celebrate.”

Speaking about the amount raised, Alastair said: “I have been blown away but our family obviously know a lot of people from stock cars and darts. Those people are so generous.

“Also every time I put it out on social media, there was so many people sharing it. I think it was also because my dad didn’t get a funeral as such and this was a way of remembering him.”

Contemplating future plans, Alastair said he has not yet given up on bringing back the barbecue tradition at Laurelvale Cricket Club with plans afoot for next year.

“Fundraising in this way is a very special and lasting tribute which makes a real difference to the lives of others, and we value this very much.”

She added: “Over the last year we have seen first-hand the impact that Covid-19 has had on families of sick children and with this demand for our services has increased.

“As a local charity we rely on public donations to fund our services and, in these current times, we really do appreciate every single donation.

“On behalf of the charity, I wish to congratulate Alastair and extend our heartfelt thanks to everyone who supported him in any way as without their support this amazing achievement would not have been accomplished.”

Alastair fundraising page will remain open for a few days so click here if you would like to make a donation.