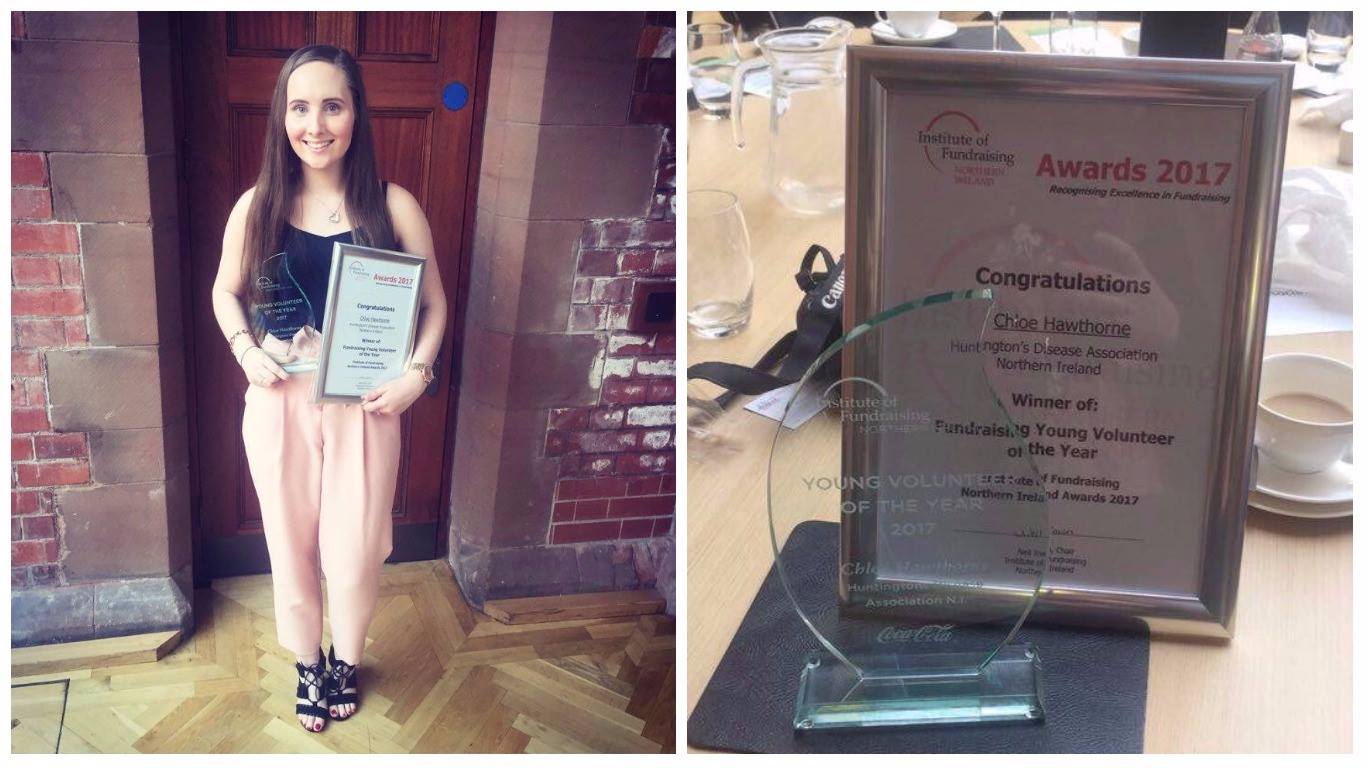 A County Armagh teenager who raised over £18,000 for charity has picked up a top award at a special function in Belfast.

Seventeen-year-old Chloe Hawthorne, from Redrock, has been crowned the Fundraising Young Volunteer of the Year at the event in the Riddel Hall.

Chloe has been recognised at the awards, hosted by the Institute of Fundraising Northern Ireland, for her work on behalf of the Huntingtons Disease Association Northern Ireland.

Mum Helen – who has Huntingtons Disease – was there to see Chloe collect her award in front of an audience of over 120 guests.

The audience heard how the Royal School Armagh student, despite studying for A Levels, working part-time and being an active member of her local Young Farmers’ Club, had raised the fantastic sum.

Chloe – who lives with proud mum and dad Helen and Alan, and younger sister, Sophie – told Armagh I she was “delighted and honoured” at winning the award.

Her success came after she was nominated by HDANI.

The audience at the awards was told: “Chloe raised this money alongside her family through relay teams in the Belfast Marathon and a fantastic coffee and craft morning.”

Huntingtons Disease is a rare neuro-degenerative disease which can affect individuals in many ways including gradual loss of control over movement and feeling.

Chloe told the audience she had a 50/50 chance of inheriting the gene which can cause HD, and she has been raising money to help HDANI provide information, advice and support services to other families, and to enable young people to participate in activities which they might otherwise not have the opportunity to enjoy.

As the award was handed over, guests heard how “Chloe has a fantastic, positive attitude and has been an amazing volunteer and youth advocate with Huntingtons Disease Association here in Northern Ireland.”

The Fundraising Volunteer of the Year was truly thrilled at the recognition – but more so for the charity than for herself.

A typically humble Chloe told Armagh I : “It’s great that a small and rare charity such as Huntingtons Disease Association Northern Ireland is getting recognition.

“It will hopefully result in people becoming more aware of the disease and ultimately raise awareness.

“I wouldn’t have been able to win the award without the hard work of my family and my cousins supporting and helping me throughout our fundraising.”

And she added: “I’m delighted about winning the award; to raise so much money is incredible, but to get recognition and win out of the whole of Northern Ireland is unbelievable.

“It’s a very proud day for me, my family and also the charity.”