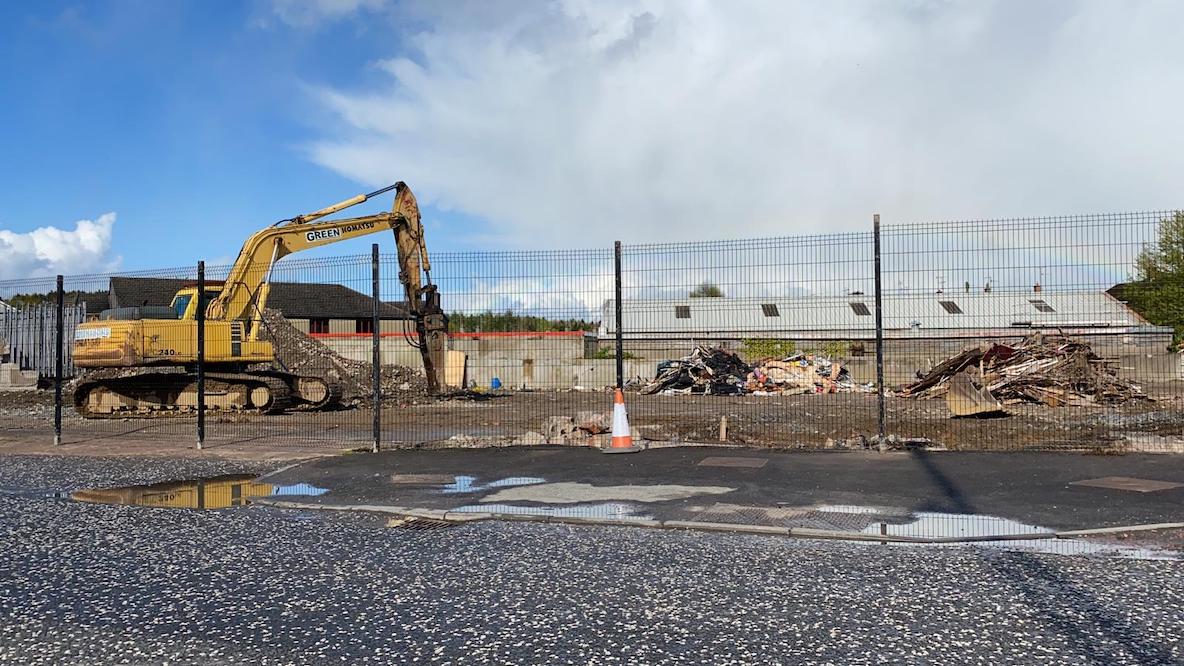 Demolition work has already been carried out on the site of the former Markethill Mart and police station.

Major plans to transform the site of the former police station and mart in Markethill hang in the balance after Council offered current proposals – recommended for refusal – a stay of execution.

The decision to turn down the multi-million project has been deferred another month in the hope the applicant – RHAS Properties – will carry out a flood risk assessment of the site.

At present, the lack of that flood risk assessment means Council are bound by government policy to reject the proposal, despite everything else being in its favour – much to the astonishment of the applicant.

Harry Porter of HPA Architects – speaking of behalf of the applicant – said Council is “unfairly penalising” his client.

“This is unreasonable that my client should pay for this assessment because Rivers Agency did not deem it necessary to carry out, in their standard, a risk assessment like they have in other towns,” said Mr Porter.

“If it wasn’t important enough to be a risk then why is it now? It’s no wonder because there has been no flooding here, or any evidence of flooding here, in over a hundred years.

“I don’t see why my client should be penalised into paying for a full flood risk assessment despite the fact he is not adding one drip of water to the system.”

Chair of the committee, Councillor Darren McNally, agreed that the project was a “very exciting one for Markethill but there is no getting away from the fact we need a flood risk assessment for this site”.

Councillor Sam Nicholson commented: “We have all listened intently and we have great sympathy for the applicant. The site is everything we talk about in Council: it is brownfield; it’s regeneration; it’s job creation; it’s economic and private development.

“It fills so many criteria that we are trying to instil in our towns and villages and for it to fall on this hurdle is very disappointing.

“Unfortunately it seems as a committee we are hamstrung with policy so all I can do is urge Mr Porter to reconsider and speak to his client and try to get the flood risk assessment. It’s a worthwhile project and it’s a pity we’re at an impasse at this moment.”

Alderman Gareth Wilson, speaking in relation to demolition works already carried out on the site, said: “There’s an expectation from people that when they see buildings removed and applications submitted that there’d be a relatively realistic chance there would be development of such a site in the middle of town.

“Whilst we heard that that isn’t ruled out by any means, it is a hurdle that has to be overcome, and I would be of the view that re-looking at this issue and trying to reach a consensus is really, really vital for the future of this site.”

He added: “It was a former mart and from my perspective I wouldn’t want the hammer falling on these proposals prematurely.”

Councillor Wilson said a deferral of the decision and period of grace to allow a conversation to happen would be the best way forward.

The committee agreed, which ultimately keeps the door open for exciting plans. A decision will be made at next month’s planning meeting.