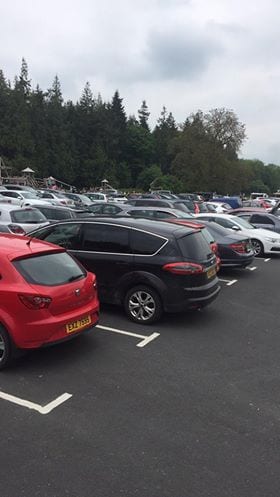 Multi-million pound redvelopment plans at Gosford Forest Park have got the local community buzzing – and already people are flocking to the attraction to see work progress.

The car park was full to overflowing this afternoon (Monday), as hundreds took advantage of the scorching bank holiday weather to see for themselves.

One local resident said Armagh City, Banbridge and Craigavon Borough Council must now ensure a restaurant and additional car parking are top of the agenda as the scheme progresses.

The council last month signed off on its preferred option to create “one of the top five forest parks in Northern Ireland, providing a five-star, family focused, forest holiday experience”.

David Bradshaw Quinn, who regularly walks his dog at the park, said the council should be buoyed by today’s visitor numbers.

But once again the hard shoulder outside was packed with vehicles – which he believes is because there simply was no space inside!

The redevelopment of Gosford is expecting to cost in the region of £5.1 million.

And central to this will be a state-of-the-art visitor centre – costing in excess of £2.1 million.

It is expected to include a cafe.

But Mr Quinn says he has already made his own views known and believes council should pull out all the stops with an eatery which will be an attraction in itself.

He said: “I did suggest to them a round tower with a revolving restaurant with viewing platform and the roof like a canopy of leaves.”

Gosford plans also incorporate an adventure play trail, and ‘multi-use’ trails – for walking, cycling, running and horses – and work on these has started.

Car parking on site is to be extended, the existing park increasing from 123 to 177 spaces, and an ‘overflow’ car park – of around 325 spaces – created.

Mr Quinn added: “More space for cars is definitely needed. There is waste ground on the outside of the wall at the junction to Hamiltonsbawn. Before the new road was built the road used to run around the wall.

“The old road has since grown over but it’s a huge space and could be turned into a car park with an entrance put into the wall for people to walk in to the park.

“Today cars were parked right up the road and the car park was full of cars, even parked on the grass at the car park, as there was not enough space.”

The local man said he was amazed by the crowds.

He added: “This should give the council encouragement in that if they spend the money on the park people will come.

“The ice cream van and burger van was were; it’s good they are there and a big attraction.

“The play park was packed and I walked my dog around the permiter.

“There were many others just there walking and people now exploring the new cycle paths.

“It’s a great hit with the public. I’ve never seen it as busy, but if they had a restaurant with verandahs people would flock to it and sit and watch the deer and everything else around them.”

In all, 17 options were drawn up and considered in depth before the preferred ‘package’ for the redevelopment was decided upon.