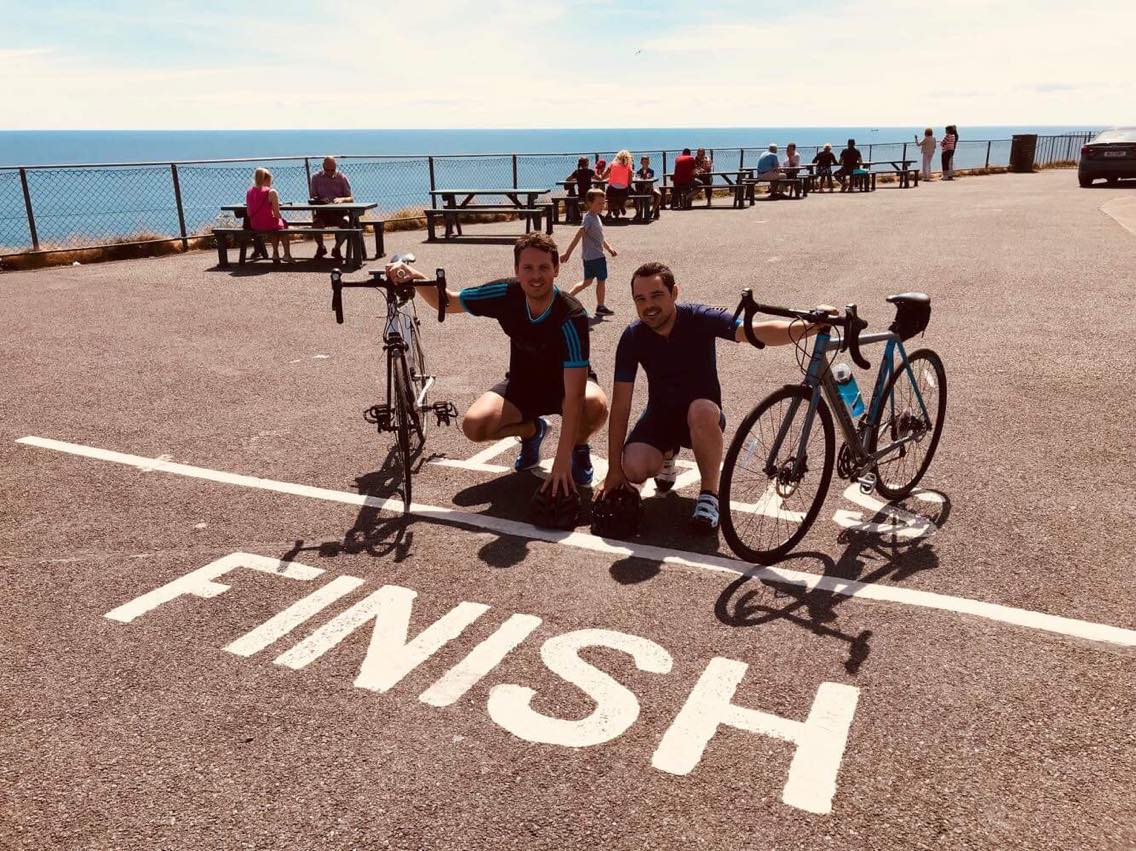 A fundraising effort by two former Markethill High pupils in memory of their brother has smashed its target – with enough raised to buy a defibrillator for the school and give a healthy boost to TinyLife.

Glenn and Kyle Chapman successfully completed their charity cycle from Mizen Head in the south to Malin Head in the north of Donegal last Monday night.

They did so in memory of brother Mark, who was only 15 years of age when he suffered sudden cardiac arrest due to a rare heart condition, ‘Hypertrophic Cardiomyopathy’, 20 years ago.

Armagh I caught up with the brothers in April, when the target had been to raise £2,500.

Supported by their parents and sister Katrina Sims, they wanted to purchase a defibrillator for Markethill High, which all three brothers had attended.

They also wanted to raise money for TinyLife, another cause very close to them, for the support given after Glenn’s son Edgar was born six weeks prematurely.

Now, having had time to catch their breath, they have been reflecting on an emotional journey – a lucrative challenge for two great causes which will make a difference to so many others.

The family are delighted with the reaction to the fundraising efforts and want to thank everyone who donated and supported them in any way.

Thirty-year-old Kyle, who lives in Australia, and Glenn (31), from Richhill, have been touched by the “overwhelming generosity” of everyone.

To date, they have been able to secure £2,250 in funding for a defibrillator to be placed in the Sports Hall at Markethill High.

And the TinyLife charity has also been boosted to the tune of £1,400.

Donations are still coming in – and will be gratefully received for both causes – and for both Kyle and Glenn the hard work has been worth the effort.

Kyle told Armagh I : “We reached the finish line at the most northern point of Ireland at Malin Head signal station late on Monday evening. The penultimate day was the hardest day by far! The rain was torrential – from Ballyshannon to Londonderry, a distance of 120 kilometres – and it finally broke once we got to Muff.

“With visibility less than 20 metres, soaked to the bones, aches and pains truly kicking in from the previous three days, it was a battle to push ourselves to the finish line.

“With road surfaces becoming increasingly difficult and hills ahead, we made the final mental push to the coast.

“Neither of us had anything left in our tanks, but with a glimpse of our family in the distance it was the last push we needed to realise we were near completion of this unfathomable journey.

“Greeted by our cheering loved ones, personalised signs and the sun splitting the clouds, a euphoric moment filled us as we took in the rocky coast line passing the official finish line.”

In all Kyle and Glenn, had cycled an incredible distance of 671 kms, between Friday, July 20 and Monday, July 23.

And, Kyle – who got off a long haul flight from Australia just the day before and got on a road bike for the first time – they “felt every pothole of it!”

For Glenn, the first day was by far the hardest, through the Killarney mountains.

“For most of the day we were fighting an uphill battle, reaching elevations of 600 metres above sea level – finally hitting home the mammoth task that was ahead of us,” he explained.

The most they cycled in one day was between Galway and Ballyshannon – a distance of 182 kms – but the weather was on their side that day, with Glenn getting sunburnt for his efforts!

“It was probably the smoothest day of them all,” admits Glenn. “The favourite part of the journey has to be the barge from Tarbert to Lilimer, crossing from County Kerry into County Clare – the 30 minutes rest on the barge was badly needed at that stage!”

They were also blown away by the “generosity of strangers asking about our trip and cause”, as they would dig deep and sponsor them there and then on the spot!

While both brothers undertook the gruelling cycle it took many more to help them achieve their goal.

“We have to say a massive thanks and appreciation to Katrina for planning the journey and accommodation – the brains of the operation – Mum and Dad, and Raymond Black for supporting us along the way, keeping the bikes and us well oiled for the journey ahead and keeping the spirits high when needed!”

Such a magnificent fundraising drive and a real family effort.

“We are so very proud of the boys and Katrina,” they said.

“Mark would be very proud of what they’ve achieved.

“It has been an emotional fundraising effort for two fantastic causes so close to our hearts. Thank-you to all those that have given and supported them.”