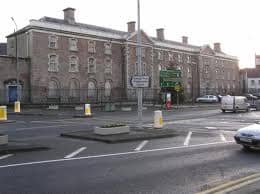 Plans to introduce a one-way traffic system around the Mall in Armagh are not now expected to begin within the next calendar year, Armagh I can reveal.

The information came to light in correspondence recently sent to Armagh Council from the Department for Regional Development over a major works project due to get underway this year.

We exclusively reported in December plans for the multi-million pound drainage and sewer upgrade in Armagh, which will involve digging up major roads in the city centre, when it was expected that work was due to begin in the spring of this year.

There had been criticism over why the work could not have been undertaken when other utility schemes were taking place in recent times, such as pipe laying for the local gas network.

Armagh Council’s Public Services Scrutiny Committee was last year given a presentation on the need for the works when officials from NI Water attended.

A number of points were made during the course of discussions at the meeting. A drainage study had been undertaken in 1998 to investigate the efficiency of the existing sewerage system and identify any opportunities for upgrading and improvement works.

NI Water had commissioned White Young Green to progress the Phase 1 scheme to completion and it was hoped that works would commence in spring 2014.

Now Armagh Council has received a letter from the Private Secretary to Regional Development Minister Danny Kennedy in response to concerns raised by the council last autumn.

The Minister was pleased that NI Water had provided council with a presentation of its proposed scheme, outlining the benefits it would bring to the city. NI Water had developed a detailed Traffic Management Plan in conjunction with Departmental officials and the PSNI.

The Traffic Management Plan had been developed taking account of current traffic arrangements and was considered to be the most appropriate method of delivering this major scheme.

In order to reduce the impact of the scheme on traffic progression, the plan made provision for the use of night time working, restricted hours, weekend working and the use of the summer months to carry out this work.

NI Water recognised the considerable impact the scheme was likely to have on the local community, given the nature of the construction work through 2.5 kilometres of the city’s main arterial route, and would “take all reasonable steps to mitigate disruption during the construction works”.

Given that work was well advanced in terms of the arrangements for carrying out the scheme, the Minister did not see any merit in agreeing to the council’s request to form a steering group on the issue.

It was pointed out that, with regard to the proposed one-way Mall gyratory traffic scheme, whilst a considerable amount of work had already been completed, the computer simulations had identified areas where additional work was required in the design of the junctions.

High traffic volumes, combined with the physical constraints of the site, were presenting difficult technical challenges which officials were currently seeking to overcome.

As such, there was no proposed commencement date for the scheme and, even if those difficulties could be overcome, it was unlikely that any works would commence on site during this calendar year.  But, should there be any works in the area which could be co-ordinated to reduce costs and disruption to the public, officials would endeavour to ensure these were carried out.

NI Water apologised in advance for any inconvenience and wished to thank local councillors for their help and support for the project.

Clerk and Chief Executive John Briggs referred to the presentation by NI Water to the committee regarding the upgrade of sewerage systems in the city, after which he had written to the Minister before Christmas requesting that other works planned for Armagh City could be undertaken at the same time, and requesting that a steering group be established which councillors could take part in, since there was potential for the scheme to cause serious disruption.

He referred to the Minister’s reply in which it was indicated that he did not wish to establish a steering group at this stage.

SDLP Councillor Thomas O’Hanlon expressed his disappointment in the approach taken by the Department as the proposed scheme by NI Water would have “major implications for the city”, particularly since 2014 was a significant year for Armagh. He pointed out that the reply had come from the Minister’s Private Secretary and not from Mr Kennedy himself.

DUP Councillor Freda Donnelly referred to the Minister’s indication that he did not wish to establish a steering group at this time, and enquired whether councillors would be given a timetable of works closer to the start  date.

It was felt there was a need for some discussion with the police and those responsible for traffic management.

Councillor Donnelly suggested that the Southern Education and Library Board should also be involved in discussions in light of school transport services potentially being affected.

Councillor O’Hanlon proposed that correspondence be sent to the Minister seeking an urgent meeting due to the timing of the NI Water works.

UUP Councillor Sylvia McRoberts agreed and remarked that traffic could be “totally chaotic”.

It was agreed to write to the Minister outlining concerns and seeking an urgent meeting to discuss traffic management plans in advance of the proposed NI Water scheme’s start.