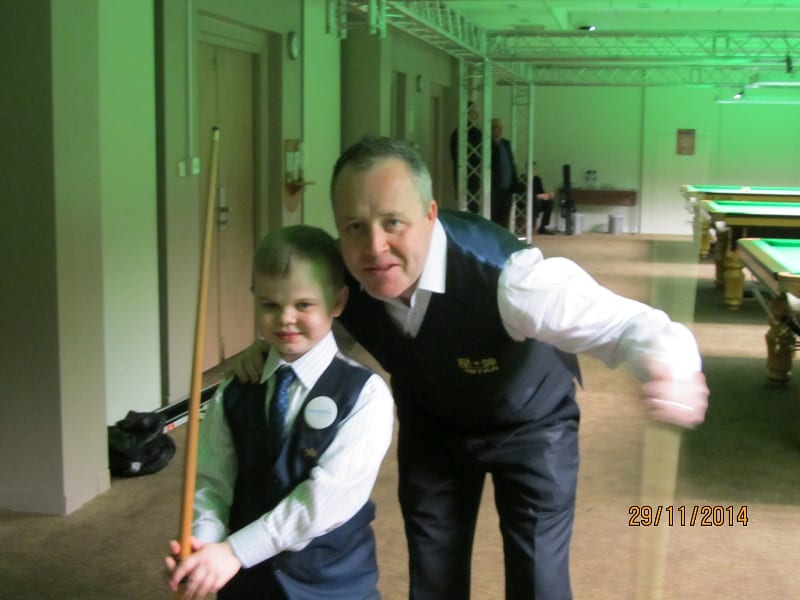 A snooker-mad Armagh boy – who was diagnosed with kidney failure at birth – has met his hero John Higgins thanks to the wonderful work of Make-A-Wish® UK.

When 10-year-old Collum Coffey was sick in hospital as a young child, his mum Christina put snooker on the hospital television once children’s TV was finished and the young lad’s love of the game began.

He was lining up balls on the floor before he could even walk or talk and closely follows his favourite player, John Higgins.

So Make-A-Wish® UK, the charity that grants magical wishes to children and young people fighting life-threatening conditions, granted Collum’s wish to play snooker with his hero…

Collum, from Armagh, travelled to The Crucible, where he watched a snooker match before meeting John Higgins.

The pair played snooker together and John shared lots of snooker tips with Collum and even gave him his dickey bow as a keepsake!

Collum and his mum Christina also enjoyed a VIP tour around the Crucible, where they met other famous snooker players. Christina said: “The wish went beyond all expectations and has made Collum even more determined to become a professional snooker player. He recently found walking very difficult and struggled to move round the snooker table, but he got lots of tips from John on the wish and is now feeling really positive.

“The memories of the wish will stay with Collum forever.”

Collum has been on dialysis and was tube fed from birth because his digestive system was shutting down.

In April 2012, when he was eight, he had a kidney transplant from his mum, which was successful, but he will be on anti-rejection drugs for the rest of his life.

Before the transplant, Collum’s growth had been affected by his condition and he was very small for his age.

Post-transplant Collum has grown, but this has put considerable pressure on his legs, so he is hoping to have a knee replacement and knee extension in 2015.

There are currently 20,000 children and young people in the UK fighting a life-threatening condition.

In 2015, Make-A-Wish wants to grant 1,000 wishes and need to raise £7.5 million in order to achieve this. Make-A-Wish receives no government funding – so every donation really does count.