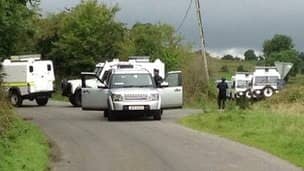 RESIDENTS of Cullyhanna will spend another night out of their homes as the PSNI confirmed this evening (Wednesday) that a major security operation is still ongoing.

A major bomb attack in the South Armagh village was thwarted as police and soldiers were involved in a wide-scale security operation close to the border.

It is expected that police will brief press tomorrow (Thursday).

A rocket launcher and at least two mortar weapons were found following a search which has lasted for several days. It is unclear whether the Army will continue to look for further devices.

Reports indicated that the mortars, already set up and planted vertically, could have been about to be used to attack a police helicopter while it was responding to another incident.

Newry and Armagh Sinn Fein MP said tonight (Wednesday): “The alert was first raised a number of weeks ago that there may have been a suspect device in the Cullyhanna area.
“Over the past day families on the Sheetrim Road have been evacuated and I believe at this point they have still not been allowed back to their homes.
“This is a great inconvenience for a rural, farming community, particularly when schools have just reopened. I hope that the area is made safe as soon as possible and life can return to normal for those affected.”

A spokesman for the PSNI confirmed the discovery of a mortar type device and said the operation would go on overnight to examine and make safe the device.

All members of the public were being asked to avoid the area, close to the village of Cullyhanna.

Police also thanked the community for their co-operation and patience.

They confirmed that at least one of the “suspicious objects” was a “mortar type device”, and said: “Army Technical Officers are continuing to examine and make safe the device.”

Local Sinn Féin Councillor Colman Burns said up to 11 families had been evacuated from their homes on the Sheetrim Road.

Troops had been scouring the countryside, using sniffer dogs and metal detectors, searching for equipment believed to have been acquired and hidden by dissident republicans.

The prevented attack was believed to be planned as the latest in a series over recent years which have claimed the lives of two soldiers, a police officer and a prison guard in Northern Ireland.

He said: “I am concerned at both the capability and the intent of those sinister elements behind this attack and it simply reinforces how important it is that local people give total support to the police and provide them with every assistance possible as they attempt to protect and serve the entire community.

“I would appeal for anyone with any information to come forward immediately and help the police to catch whoever was responsible for this incident.”

SDLP Assemblyman Dominic Bradley said the scare had resulted in “palpable anger” amongst the local community.

“The people of Cullyhanna, South Armagh, and, indeed, the people of this island, want to be left in peace. Instead, those responsible still live in some warped existence of the past,” he said.