From seizing alcohol to a major drugs bust 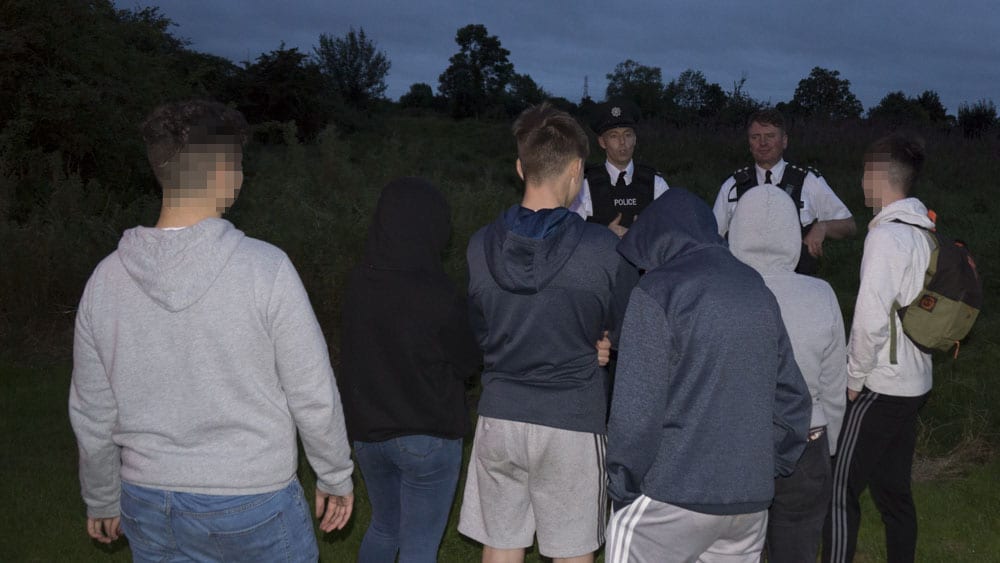 It was shortly after 9pm on Thursday and the night, which began with little drama, suddenly changed with the crackle of the police radio.

The officers in front, Inspector Mills and Chief Inspector Burrows; our chaperones for the evening, received a report of a vehicle in the Lurgan area containing a significant amount of Class A drugs.

The intelligence had come through from Merseyside.

So, within moments we were arriving at the scene in Derrymacash; TSG officers were on route.

Removing alcohol from underage drinkers was one thing but carrying out an operation of this kind added a certain tension to the evening.

It started around 7pm at Lurgan PSNI station when we were introduced to Chief Inspector Jon Burrows – second in command for the ABC borough – and Inspector Mills.

And after a brief chat with their social media guru, Sergeant Gaz, we were on our way.

Social media is huge for the PSNI, with thousands on their Twitter and Facebook pages and ‘Gaz’ stressed the importance of that engagement with the community, using that medium many people are comfortable with.

The main objective of Thursday night’s operation was to deal with the underage drinking on what was another GCSE Results night.

Despite alcohol being the common issue on these nights – and indeed on Thursday – it is the prescription drug tramadol which is the big worry for the PSNI – the alcohol is just the gateway.

Tramadol is apparently much deadlier than heroin and cocaine and recent figures would seem to back that theory up.

First stop on the night was on the Portadown Road in Lurgan; a known hotspot for anti-social behaviour. Several young boys were sat drinking a bottle of Buckfast.

Chief Inspector Burrows approached the boys and spoke to them before they handed over the bottle without too much protesting. They were written up a seizure notice and sent on their way.

Next, we made our way onto the underpass on the Portadown Road. Two young girls were discovered sitting drinking a bottle of Buckfast – there’s a theme here with the tipple of choice, perhaps.

Again Chief Inspector Burrows approached on foot. It turned out there were around 50 kids drinking under the bridge but this didn’t surprise the on-duty officers.

Even though most of them ran off, some remained. They were very approachable, and kindly handed over the booze without the usual prompt.

“No point making trouble for myself,” uttered one girl with an air of resignation.

Discussions on GCSE results followed. It was a celebratory mood and the officers weren’t there to try and dampen that atmosphere but their presence was aimed as a deterrent against anti-social behaviour associated with the area.

After some dialogue the kids were on their way.

Next up was an area of council football pitches in the north of Lurgan. Around 30 youths had gathered and after spotting the officers, they scattered, except for a small group of eight who did not have alcohol on them.

There is a need to educate youngsters on the dangers of alcohol and drug abuse, days after 200 tramadol tablets were seized from a young man; a drug easily accessible online. Solvent abuse is another big problem the police are trying to tackle.

It was a very relaxed approach to the evening and despite them acting as the ‘party poopers’ for many, they were well received by those who had their party pooped!

Then came the call over the radio. The tone changed. There was a more serious issue to deal with.

We pulled up to a nice house in the Derrymacash area and could not imagine what would have been going through the unsuspecting family member’s heads when two officers knocked on the door and asked to search the van sitting outside in the driveway.

It must have been horrible, especially when the mother of the suspect was told what exactly was going on.

Inside, officers discovered an adaptedRed Bull can, but as you can see from the images, when you screw the top off, there was a significant quantity of suspected class A inside it. There was also a bags and scales.

The suspect was in England at the time of the seizure but looks like he may just have ruined his life with this move.

It showed us how quickly a night can change; from patrolling the streets, protecting youths for their own good, to taking a potential drug dealer off the streets altogether.

But all in a night’s work for the PSNI!

*We’d like to thank the PSNI for the invite and giving us an insight to a night’s work in the ABC area.