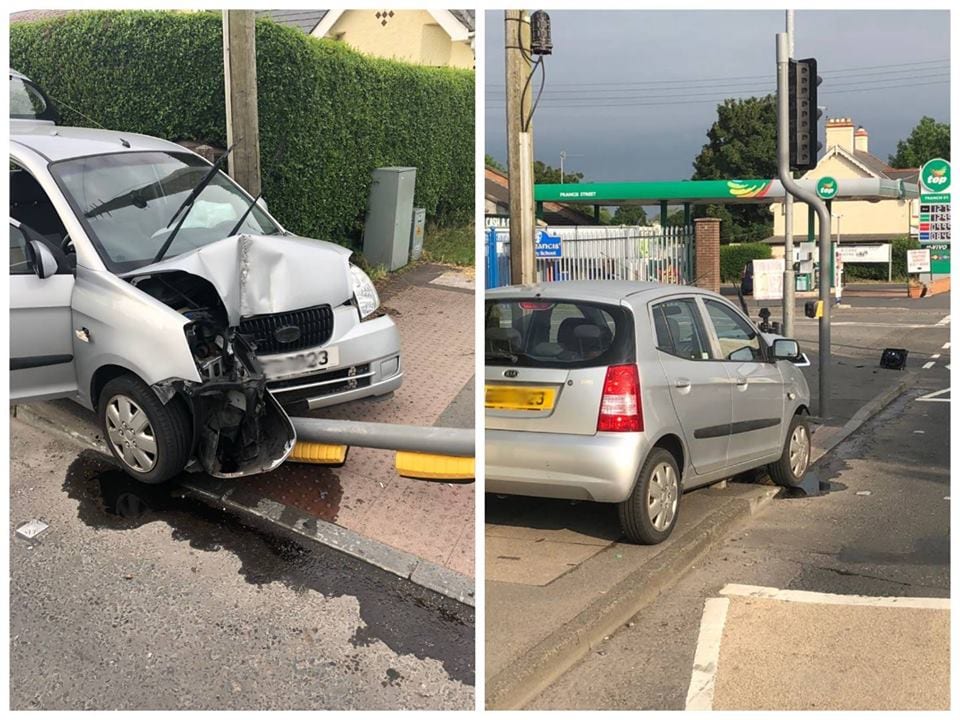 The driver of a stolen vehicle who crashed into a pedestrian crossing was almost four times the legal drink drive limit.

Police in Craigavon arrested a man on a series of charges after the incident at Francis Street in Lurgan.

And a test gave a reading of 131 mgs of alcohol in 100mls of breath – just 9 mgs short of being four times the legal limit.

The man was charged with aggravated taking and driving away, excess alcohol, no insurance, no MOT and driving whilst unaccompanied.

But police, revealing details on social media on Sunday morning, added: “Thankfully, there’s no death by dangerous driving offence to answer to. It could have been so much different.”

They shared an image of the collision scene and warned others not to drink and drive or for people to report those they suspect are driving whilst under the influence.

Police said: “The only upside to this is that it happened on a Sunday morning and not a week day. The driver is now en route to custody with no one else injured, but if it had been the same time tomorrow, it would now almost certainly be the scene of a fatal, with school children lying dead on our roads.

“This is Francis Street, Lurgan. Those local to it will recognise it as being literally on the doorstep of a primary school.”

Appealing for public help, they added: “If you suspect someone of drink driving, phone 999 immediately. Don’t wait, don’t hope they don’t crash, don’t turn a blind eye. If one of the many dog walkers, or someone on their way to Chapel had been at that spot today we would have been mourning another completely avoidable death on our roads. If it were tomorrow…it doesn’t bear thinking about.

“Finally, if you are someone selfish enough to drink and drive, look closely at this photo. This is a fortunate escape. If convicted, the driver will lose the license, the insurance costs will soar, and they can be glad it’s not prison time with blood on their hands. It is never worth it.”