A fit and healthy 43-year-old, the Lurgan man's 15-year-old son, neighbours and paramedics saved his life after he suffered cardiac arrest on his own doorstep and prompting the family to raise money to help the vital work of Air Ambulance NI 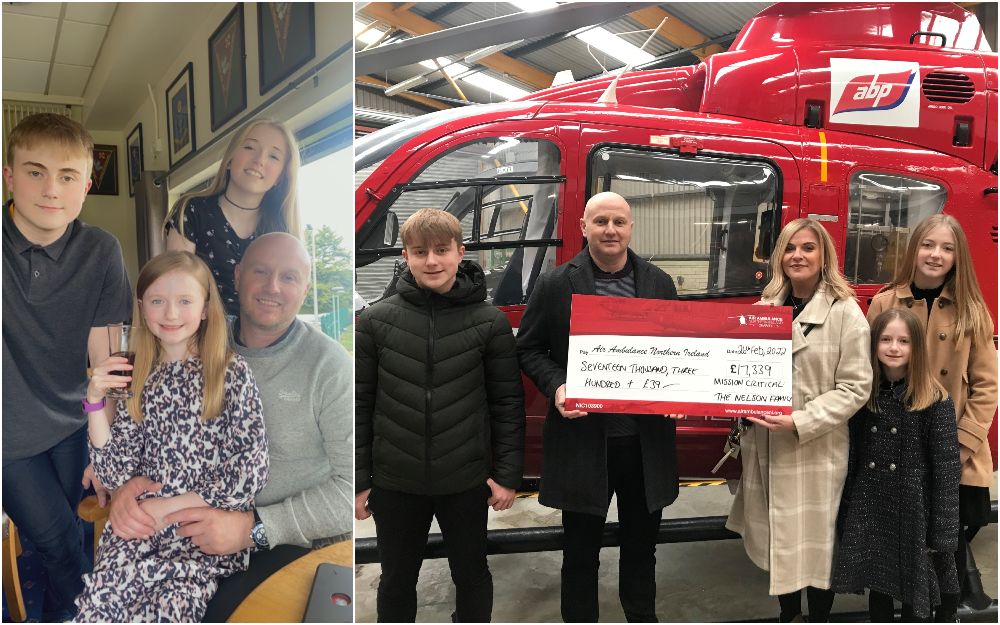 A County Armagh man who owes his life to his quick-thinking son, neighbours and paramedics has raised over £17,000 to help Air Ambulance NI save more lives.

Monday, August 9, 2021 began like any other day for Ryan Nelson, from Lurgan.

Ryan was a fit and healthy 43-year-old who loved his football and being outdoors.  He had just arrived home that morning with a coffee for his wife, Vivienne, when without any warning he took sudden cardiac arrest on his doorstep. He was unconscious and unresponsive at the scene.

The controller at the Northern Ireland Ambulance Service (NIAS) talked Corey through lifesaving CPR which he relayed to Ryan’s neighbour Michael McLoughlin who worked on Ryan with another neighbour and nurse, Siobhan Totton. The HEMS team were able to provide further critical care treatment to Ryan within minutes of arriving on Ryan’s doorstep. Having stabilised his condition Ryan was then transported to the Royal Victoria Hospital, Belfast for further treatment and care.

He was fitted with an Implantable cardioverter-defibrillator (ICD device) is recovering well and slowly adapting to life.

Ryan said of the incident: “I’ve heard that only 1 in 10 people suffering a cardiac arrest outside of hospital survive, so the odds were against me. CPR really made the difference, and I would like to encourage everyone to learn about CPR and familiarise themselves with defibrillators, as you never know when it could be needed.

“I will be forever grateful to the chain of people involved in saving my life that day. The quick response from my family, neighbours, paramedics, and the HEMS team was critical and I am extremely fortunate to come through this ordeal.’’

Ryan’s wife Vivienne added: “I heard of cases where the air ambulance crew have been needed on the news or on social media, but you never ever think it will happen to you.

“Ryan was a normal healthy 43-year-old with no previous health issues or problems. Witnessing a cardiac arrest has been the most traumatic experience my family have ever had. But if not for the chain of events that day Ryan wouldn’t be here now.

“I am forever grateful to everyone involved that day and in particular to the HEMS team for the lifesaving treatment they provided on my doorstep.’’

The family were so grateful to the HEMS team at Air Ambulance NI that they decided to take action and raise funds to ensure more people have access to this life-saving service in the future.

Vivienne and the Nelson family started the ‘Mission Critical’ appeal on JustGiving and Facebook to tell their story and raise funds for the charity.

Vivienne wants to thank everyone for their support.

“People have been incredibly kind and generous,” she said. “We have been gifted so much locally through businesses, people getting in touch through Facebook wanting to support the charity, family members getting support through their workplaces and so many people contacting us telling their own stories of being helped by the HEMS team at Air Ambulance NI.”

The family want to sincerely thank every single person who have helped them raise now over £17,339 for the charity which they were delighted to present to the Air Ambulance NI team in Lisburn.