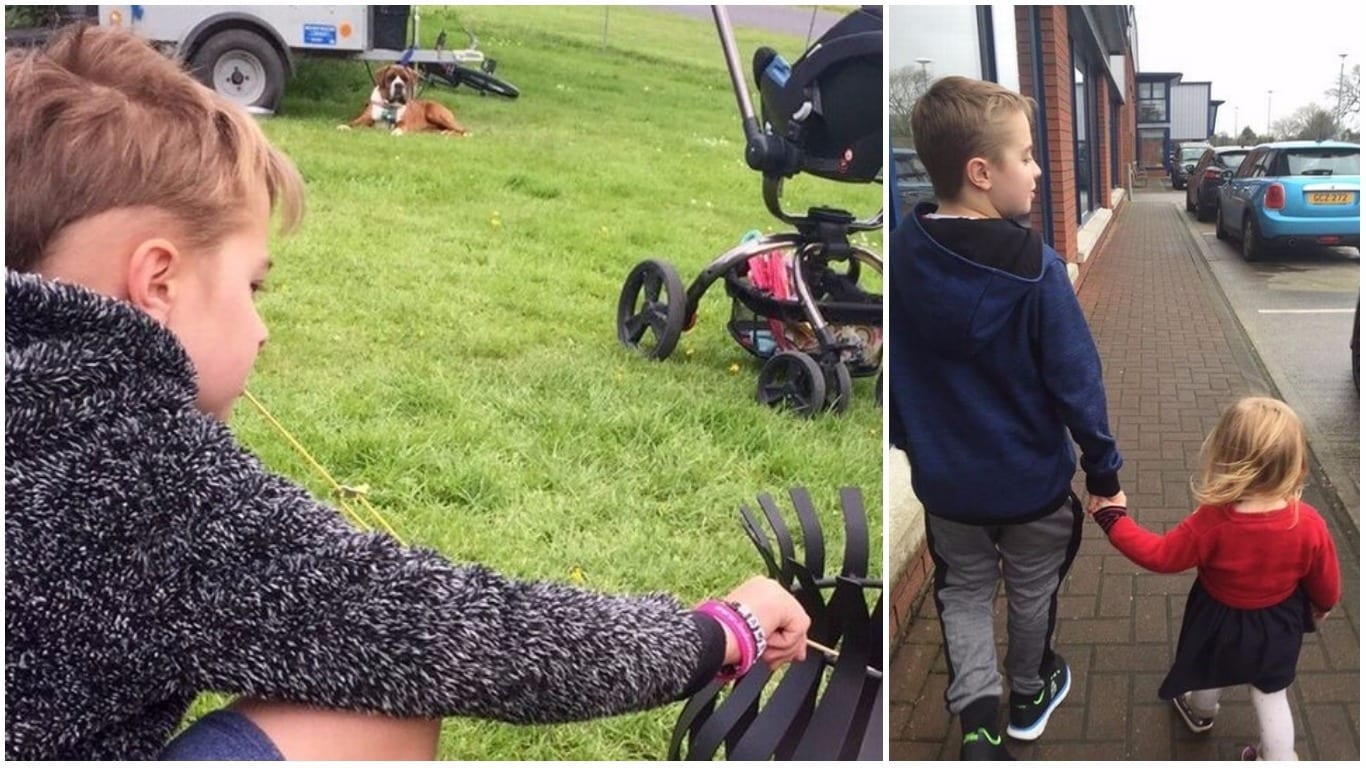 The mother of a 12-year-old boy diagnosed with a rare brain tumour says her son’s positivity is an inspiration to the whole family through what has been an “awful” time.

Cameron Truesdale, from Waringstown, was diagnosed with the rare DIPG brain tumour earlier this year – the only recorded case in Northern Ireland.

DIPG are highly aggressive and difficult to treat brain tumours found at the base of the brain.

Cameron’s doctors told his family in January the tumour would be inoperable – a bitter blow to his family.

Mum Cassandra Finnegan, told Armagh I how they thought he was going to lose his sight initially, back when the issues arose in January.

“We took him to the doctors on the Friday morning because he started slurring his words,” she explained.

“There had been a few things previous but we kind of just pushed them off, they were quite normal things like headaches and tonsillitis. There was a wee turn in his eye, which wasn’t unheard of, it was only when he started slurring his words the doctor looked at him and sent us straight to hospital.

“We initially thought he was going to lose his sight. It was early that same afternoon when we got the MRI; the results came back pretty quickly. We were called into the room with three or four doctors who sat us down to say Cameron had a brain tumour that wasn’t operable and there’d be no treatment.

“Honestly, I was quite calm. My initial thoughts were, it’s fine, God will fix it, we’ll get through this and it’ll be okay.

“His daddy was a lot more upset and didn’t take it as well as me. We spent the weekend in hospital.”

Cameron underwent three weeks of radiotherapy to stun the growth of the tumour and despite doctors’ fears, Cameron sailed through the harsh treatment.

“He has been amazing the whole time, the doctors were quite shocked as to how well he bounced through radiotherapy,” said Cassandra, who also has three other daughters: Chloe, 9; Courtney, 2; and 17 week-old Caitlin.

“He went to radiotherapy and came home everyday, there were days he went to school the day after.”

It has been a difficult seven months for the family but it’s Cameron’s encouraging attitude that has surprised everyone.

“We’ve always been so positive with him but have been honest with him too when he asks questions about cancer and what it does.

“Those educational questions are easy to answer but he thinks of himself as quite fortunate because there are other kids who aren’t allowed out of hospital.

“He’s quite a normal 12-year-old but he realises there may be a day when he might not feel well but we will cross that bridge when we come to it.”

Cassandra understands her son is not without his doubts.

“He is spending more time with me now than he probably ever has because he’s usually very much ‘get out of my room’ but this last while he’s wanted to spend more time with me and I think that’s obviously because of his illness. there are times when he gets scared and upset.

“It’s hard for him but we’ve been very fortunate in the way a lot of the children’s charities have been with us.

“He went on a residential recently with a lot of other kids who had their own host of problems and I think that’s his new normal.

“I think that was a big thing for him to know that he’s not the only child to have to go through this. I think the positivity has really helped him.”

At 12, Cameron is beginning to open up to a world on social media, something Cassandra and her family are all too aware of.

“The effects of DIPG are so devastating, so we are so careful what we write on social media ourselves, for fear of it passing back to Cameron.

“We’ve had one or two stupid people say stupid things to him and I have had to come up with something at the top of my head to fix it. A child shouldn’t have to worry about that, that’s my job.”

A new experimental treatment for DIPG is available in Mexico but with a huge cost associated, Cassandra feels the only way of offering Cameron hope is with a fundraising appeal.

They are faced with having to raise £300,000 for the 10 months of treatment required.

“People have been so amazing and although we were quite quiet at the start – people were still looking to help in different ways – we kind of shut them down and let Cameron to deal with it how he wanted to.

“We then found out about Mexico. I had been following some of the kids who had been over there and they all seemed to be doing really good.

“Mexico is the big one for kids with DIPG. It’s experimental and is not advocated by any doctor over here but it’s one of those things, if you don’t try, you won’t ever know.

“He’s just a normal 12-year-old but that’s the thing with DIPG, he could be normal one day and in a wheelchair the next. The JustGiving page gives us options.”

To make a donation to the family’s Just Giving appeal visit here.

And to find out more about fundraisers for Cameron, visit the Facebook page Cure4Cam here.