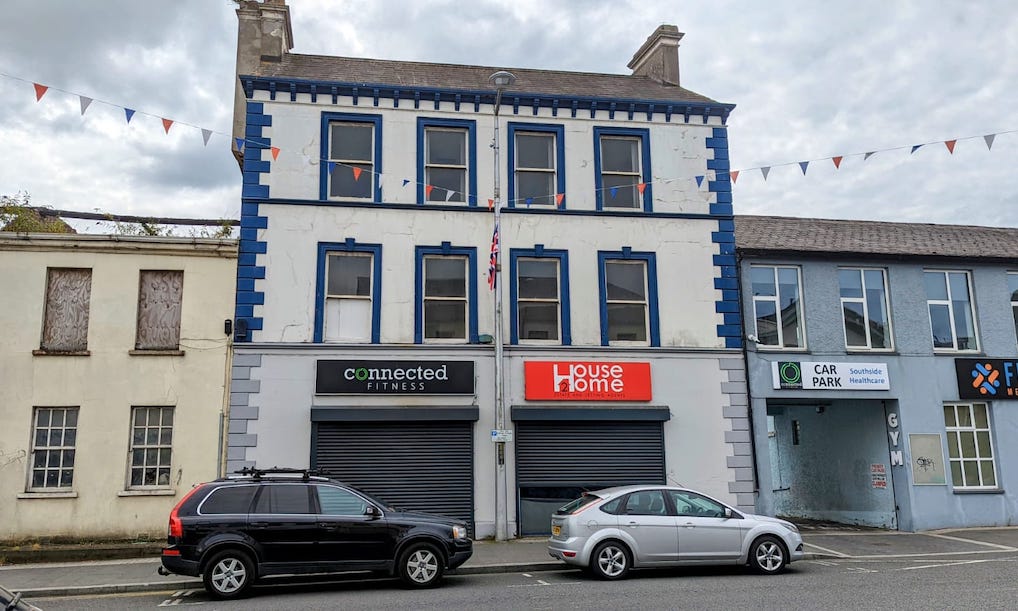 One of Lurgan town centre’s oldest properties is to be restored and brought back into productive use – as a state-of-the-art gym.

The three-storey listed building is one of 12 across the Armagh City, Banbridge and Craigavon Borough which were confirmed in April as being in line for restoration works.

They were to share in a £1.1 million funding package to help with restoration and reuse under an ABC Council-backed ‘Empty to Occupied’ programme.

The property in this instance is at 43 and 43A High Street in Lurgan.

The landmark three-storey building was built back in the early 1800s and has had various uses over the years, including retail and office accommodation.

Now proposals have been drawn up and lodged with ABC Council planners.

These would see a new lease of life for the historic structure, including the necessary application made too for listed building consent.

According to the proposals, the property will be painstakingly restored in keeping with the original and surrounding buildings.

The proposals, in the name of Johnston Pedlow Ltd, indicate a new enterprise on High Street, with plans for a gym stretching across all three storeys.

The development, therefore, details an “extension, alteration, conservation, renovation and change of use” to accommodate the new leisure fitness facility.

According to the application, the building has lain empty for the best part of a decade.

The ground floor shop and first and second floor offices have been unoccupied since before 2008.

And a ground floor estate and letting agents quit the High Street building in 2013.

According to its website, it was built in the 1800s and awarded listed status in August 1981 in “recognition of its architectural character”.

The website, summarising its background, states: “For most of its history 43 High Street acted as a residence for the professional and business classes. From 1864 to 1887 the occupants included Alfred Armstrong (General Merchant); John Black (Town Commissioner); James Monroe (Linen and Cotton Yarn Merchant) and James M.J. Scott (Doctor of Medicine).

“From 1887 James Johnston, co-founder of the Johnston, Allen and Co. handkerchief manufacturing company of Victoria Street, is listed as the occupant  of the house. Members of the Johnston family would remain here until the late 1970s.

“Following the departure of the Johnston family, the building was converted into a commercial premises with the Lurgan Fobel Centre and DIY Hardware shop the first such tenant.

“Since the closure of House 2 Home Property Agents in 2013 the property has lain derelict.”

The application comes after Armagh I revealed earlier this month that neighbouring 45 High Street – gutted by fire five years ago – was also subject to a planning bid to have it restored and brought back into productive use.

And just a week ago we reported how approval had been given to restore 42 and 46 High Street – extensively damaged in a 1,000lb IRA van bomb blast 30 years ago – as a major mixed-use development.

Works there will involve the retention and refurbishment of office accommodation, as well as the creation of nine new apartments.

This latest application to bring back the fabric of historic Lurgan High Street will be publicly advertised shortly.