Green light given for 55 new homes in Lurgan 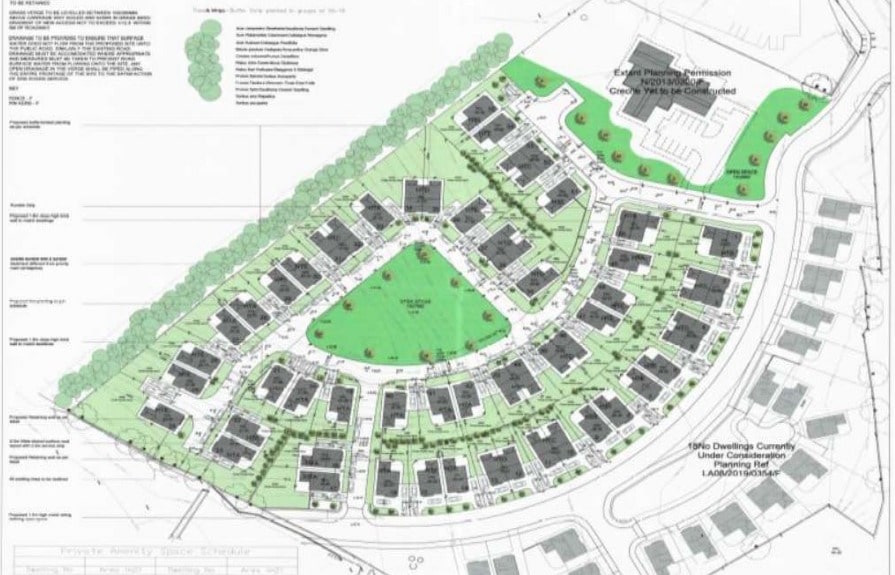 Armagh City, Banbridge and Craigavon Borough Council’s planning committee has given the green light to the development of 55 new homes in Lurgan.

The planning application, lodged by agent WYG Planning on behalf of applicant Mr Tom Campbell, found itself before the committee as it is considered a major application.

The proposal seeks to build a total of 35 detached and 20 semi-detached properties at lands adjacent and south-west of 54 Cornakinnegar Road and 45m north-west of No 1 Cherrywood, Lurgan.

The application site is 3.02 hectares in area and is currently greenfield. It fronts onto and will be accessed from the Cornakinnegar Road.

A planning officer’s report recommends the development for approval.

Councillor Peter Lavery praised the “fairly comprehensive” report on the proposal but enquired as to why the development would be installing speed control bends and not speed bumps as seen elsewhere.

The architect for the application, Paul McCreanor, explained the road, as was granted in 2007, contained a number of speed control bends and the “geometry and configuration of the remainder of the large sweep does control the speed of the traffic”.

“Within the site, the use of speed control bends around the central open space area keeps the traffic slow,” he said.

Councillor Declan McAlinden asked for assurance the open green space listed in the proposal would be protected.

A planning officer confirmed that now it has been assessed by planners as open space, any future use of that space would have to be assessed against planning policy.

“There is weight behind the need to retain open space unless it is outweighed by substantial community benefit,” said the planning officer.

“On that basis, going forward, we would regard it, more or less, as zoned open space.”

Councillor Sam Nicholson said the development appears to “tick all the boxes in relation to the policy” but asked about the site’s forming zoning as land for educational use.

“Now the site is being used for residential purposes, is that compliant with policy in relation to distribution of services,” asked Cllr Nicholson.

The planning officer said it was quite unusual but the reason it is not zoned educational land is that it had been zoned specifically for a local primary school.

“When the Craigavon Area Plan was adopted, the primary school was awarded capital funding and that was taken into account,” said the officer.

“To ensure the school could be delivered they provided this zoning for that purpose. However, when it came to designing the new school itself, they realised they could build it on their existing site.”

Councillor Ciaran Toman sought clarity on the condition to implement speed tables, humps on the road that are longer than speed bumps designed to reduce speed.

He was advised that the condition has been attached to the planning application to make sure the the speed tables are in place before anyone moves into the site.

A proposal to approve the application was put forward by Councillor Peter Lavery who praised the addition of 152 trees in the development.

The proposal was seconded by Councillor Sam Nicholson who said he “totally concurred” with Councillor Lavery’s view.