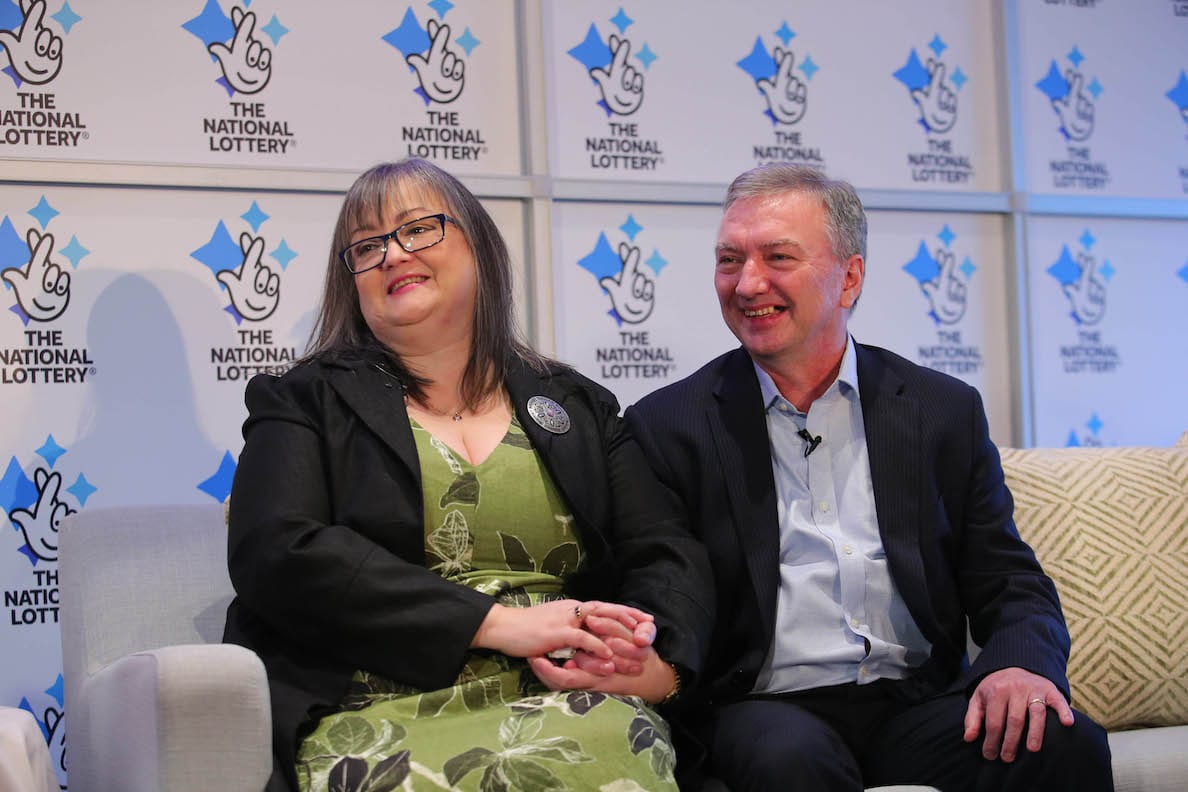 A Co Armagh couple who pocketed a cool £115m EuroMillions jackpot have admitted they had no intention of going public at first.

Frances and Patrick Connolly, from Moira, matched the winning numbers on the New Year’s Day draw, making it the fourth biggest UK EuroMillions win ever.

Speaking to the press in Belfast, the pair said they were overwhelmed.

“This is a massive sum of money and we want it to have a huge impact on the lives of other people we know and love as well as on our future too,” said Frances.

The 52-year-old said the only thing they have done since their win is make a list of people to give the money to.

And asked why they made the win public, the couple said it wasn’t their initial intention.

“I don’t think we wanted to”, said 54-year-old Patrick. “Our preference would have been to keep it quiet but there are a lot of people.”

Frances added: “There’s too many, that list is far too long. My sisters all have kids and with Facebook, it was just never going to be a secret.

“If we had small families I wouldn’t have minded asking my brothers and sisters to keep it quiet for a while but nah, it was never going to happen.

Asked what they will do with the rest of the money, Patrick said, at the minute he’s retired.

“I need to digest this,” he admitted. “But it won’t last long, I need to be doing something.”

Frances, who worked for an online magazine, said: “I’ve wanted to do my PhD in clinical psychology and I can afford to do it now.”

On realising they had just become multi-millionaires overnight, Patrick explained.

“I slid back in my chair after checking the numbers several times and said to Frances ‘Do you want the good news.?”

The couple celebrated with a hug and a cup before ringing Camelot the next morning to verify it.

“We really didn’t know what to do or how to react and we didn’t sleep a wink that night,” Patrick recalled.

“We rang Camelot at 8am in the morning to verify the win.  Then it started to dawn on us that it was true even though it still hasn’t really sunk in.”

“We honestly thought we would never win anything like this.  Never in a million years,” said Frances.

“I’m sure that lots of other people think the same but we are proof that it can happen to anyone and we feel so grateful and privileged that lady luck has landed at our door on this occasion.”

Northern Ireland has a history of big wins.

In December 2013, an unemployed woman from Strabane, won almost £27m in the EuroMillions lottery.

At the time, Margaret Loughrey said that on the day she bought the ticket, she had been to the job market to get an application form for a job with a charity.

In 2004, a cancer patient from Belfast became the biggest ever winner of the UK’s National Lottery.

Iris Jeffrey scooped £20.1m with a ticket she bought on 14 July but only realised she had hit the jackpot the following month after hearing an appeal by lottery organisers Camelot.