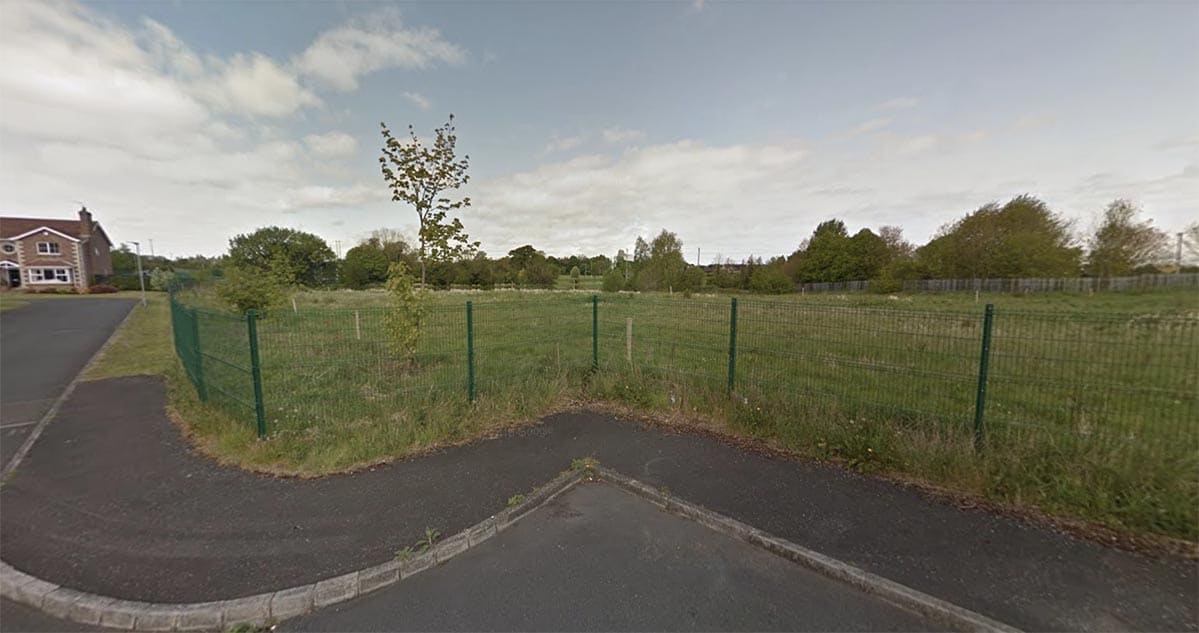 Area of open land off Woodville Mews in Lurgan where the application refers to. Image: Google

The outline application was approved at a meeting of Council’s planning committee on Wednesday, August 4.

A report on the application complied before the meeting by a planning officer notes that three third party objections had been received in relation to this application.

The issues raised in these objections include concerns about the increase in traffic, the continual development of the site, the proposed development area is home to foxes and bats and concerns that development could block natural evening sunlight of existing properties.

With regards to these issues and following a policy assessment and planning balancing exercise the report says officers are of the opinion that the proposed development complies with the area plan, the SPPS and all other relevant planning policies and recommends that outline planning permission be granted. Councillors heard from an objector who said he had three specific reasons for his objections.

He expressed doubt the land is currently in use as agricultural land, the access to the new site from Woodville Elms is not sufficient in size to accommodate the increase in traffic and the disruption to the existing residents.

The applicant  said he was pleased the application had been recommended for approval and noted it was an appropriate land use for this location.

Councillor Kevin Savage asked what the requirement was for the field to be classed as an agricultural field.

A planning officer advised a number of things were taken into consideration in determining the use of the site.

“We asked the applicant what the current use was and this application was supported by a preliminary risk assessment,” said the planning officer.

“The risk assessment has to go back and look at historical use of the site to ensure there has been no contamination of the site, especially in major applications and the detail of this risk assessment, which was carried out by an independent body shows this site has been in agricultural use throughout the recorded history from 1830 through to the present.”

The officer also noted current legislation does not require land to be in use for either livestock or growing crops to be defined as agricultural land.

When asked for his view, the objector stated the land is in use as white space and claimed they are using the fact it was agricultural land to justify the development.

“It is an open space no matter what way you look at it,” he said.

“If nothing has been planted for at least the last 15 years can you really designate it as agricultural land and use it to destroy a habitat?”

Alderman Sydney Anderson then asked about the maintenance of land and the walkway between the two developments.

He was advised the concept, that is not for consideration at this time, has a pathway through an area of mature vegetation and this would be encouraged by Council’s policy.

The officer also clarified this would be maintained by a landscape management plan that would be covered by a condition attached to the planning approval.

Councillor Ciaran Toman asked for further explanation as to how policy permits the development.

He was told there are a number of areas in the borough zoned as white land and that it allows it to have a number of uses and officers must decided if the use is acceptable.

“We have to determine if the proposed use would suit what surrounds it,” said the planning officer. “In this case, the adjacent area is residential so residential going forward should be acceptable.”

Councillor Declan McAlinden asked about the close proximity of this development to a waste water treatment plant and was assured that an odour and noise impact assessment was requested.

While there will be no odour, there may be some noise so triple glazed windows will be required and an acoustic barrier will also be needed as mitigation measures.

However, the officer did remind the committee this is an outline application and the specific location of properties would still have to be approved through further consultation with officers.

Councillor Kevin Savage said he was of the belief objectors arguments could not stand up to the policy requirements as provided by the “fairly comprehensive” response from the planning officer.

The proposal was subsequently seconded by Councillor Kevin Savage and members signalled their agreement with this approach.