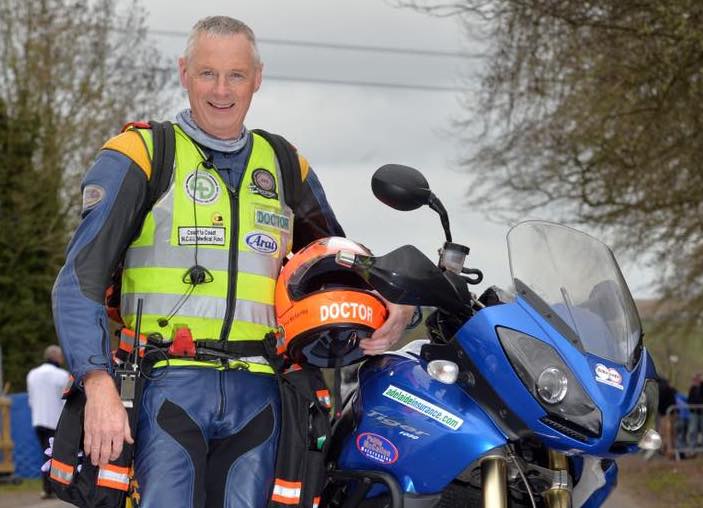 A county Armagh racing medic who has dedicated over three decades of service to racing will hang up his leathers for the final time this weekend.

Lurgan’s Dr Fred MacSorley MBE, an honorary member of the North Armagh Motorcycle and Car Club, will call it quits after the Ulster Grand Prix finishes on Saturday.

Earlier this year Mr MacSorley was honoured for his 30 years of loyal service to the Tandragee 100.

The affable GP was surprised by race organisers who wanted to show their appreciation to the flying doctor.

Mr MacSorley was recognised as Northern Ireland Doctor of the Year in 1999 before receiving his MBE in the 2011 Birthday Honours for services to Healthcare.

He will be honoured with a parade lap after the roads close at Dundrod on Saturday morning.

‘Doctor Fred’, as he is affectionately known by the road racing community, will lead the lap with his wife Dr Alex Magee riding pillion, followed by the entire medical team and every competitor in Saturday’s races.

“I have mixed emotions about retiring,” said Dr MacSorley.

“It has been a massive part of my life and I will miss it hugely. It has been such a huge privilege to be part of the motorcycling community, and an absolute honour to have looked after, in my opinion, some of the greatest sports people in the world.

“The last 30 years have been wonderful. I’ve seen the goodness of human nature; how people deal with both success and tragedy with dignity and the unbelievable support that this community offers to its members.

“And of course on our part it has been a team effort from the vans, the paramedics, the doctors, Jan Simm and her team, the chaplains; we can’t function without the full line up.”

Dr MacSorley also paid tribute to his road racing colleague, Dr John Hinds, who died following a crash during a practice session near Dublin in 2015.

“Dr John joined us as a student and his brilliance was immediately obvious,” Dr MacSorley said. “We asked him to come back when he qualified and he was one of the most extraordinary talented, generous and hard working doctors I have had the privilege of working with.