Fire service had to attend the incident last night 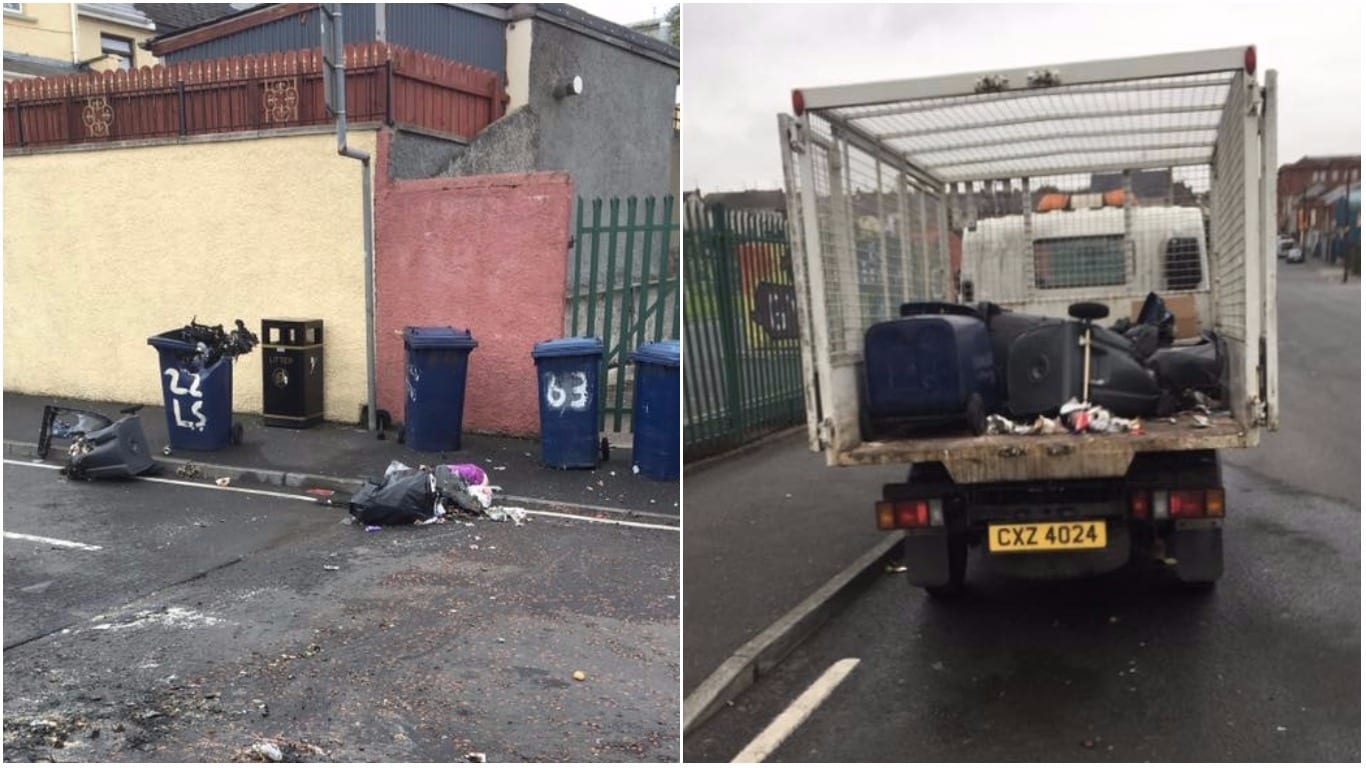 A number of bins were destroyed by the vandals on Victoria Street in Lurgan.

Councillor Declan McAlinden, who shared the images on Facebook this morning, hit out at those responsible.

“I want to condemn this latest spat of antisocial behaviour in Victoria Street,” he said.

“A number of bins were set alight early on Monday morning and the rubbish was strewn across the street.

“The bins were set alight close to dwellings and vehicles as well as Clan Eireann GAA club.

“The people involved in these incidents show total disregard to the good people living in the area and to their property and the sooner they are caught and reprimanded the better for all in the area.

“I have contacted council to replace the bins asap and to thank the staff for their quick response in cleaning up the area.”

The PSNI also condemned the attack.

“If you live on Victoria Street or Lake Street in Lurgan, you may be waking up to find it rather tricky to put your rubbish out,” a spokesperson for the PSNI in Craigavon said.

“Last night, some beacons of community generosity took it upon themselves to set fire to wheelie bins in the middle of the road.

“NIFRS attended and dealt with it and no one was injured, but that’s not really the point here, is it?

“Those guys and girls carry life saving equipment and have advanced first aid training, meaning that often they get sent to calls when they’re closer than an ambulance.

“If you’re one of the people (I’m struggling not to use terms that will get me in trouble here) who thought it funny, reasonable, or in anyway OK to not only damage other peoples property, but to waste time of such a valuable emergency services resource whilst at it, then shame on you.

“If a family member had suffered a heart attack, being involved in a road traffic collision, or had their house go up in flames, the NIFRS response would have been delayed due to your idiotic actions.

“Parents, if you think your kids may have been involved in this activity, then it’s time to take action. Think for a second about the reality had one of your own family members been trapped in a house fire and had to wait precious minutes longer, simply because your kids did this? “If you know who was responsible, call us on 101.

“The community don’t want this. Make those responsible know that by talking to us.”