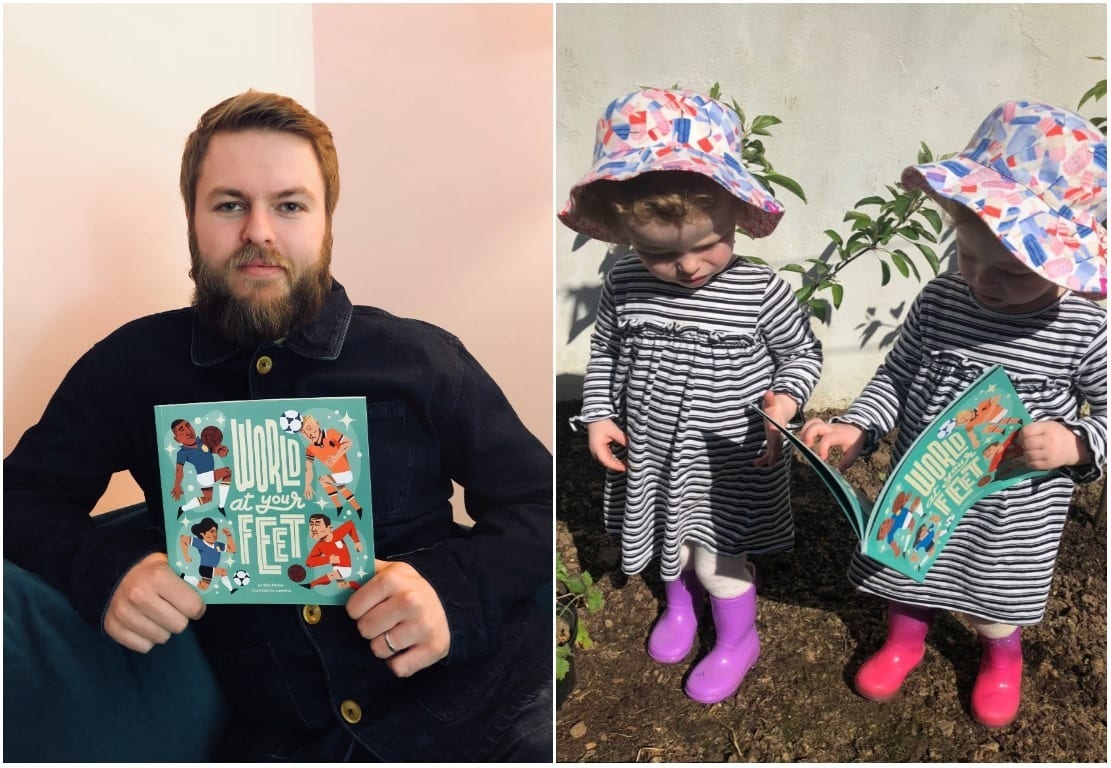 A Co Armagh writer is helping to cure World Cup fever with a picture book dedicated to the beautiful game’s most iconic moments.

Rob Parker, from Kilmore, has written World At Your Feet, which celebrates 16 memorable goals scored at previous tournaments.

Strikes by players including Diego Maradona, Dennis Bergkamp and Michael Owen are included in the book. Each goal is brought to life by commentary written in rhyming verse and accompanied by a double-page spread of colourful illustrations.

Renowned Spanish illustrator Jorge Lawerta has created all of the artwork for the 40-page book, which has received coverage in Match of the Day magazine and an endorsement from sportswear brand Umbro.

Rob’s writing skills are usually used to help Northern Irish businesses communicate with their customers more effectively in his role as managing director of copywriting agency Voz Media, but the inspiration to a write a book came from his identical twin daughters Carmen and Iris.

He said: “Carmen and Iris were born prematurely in May 2016. My wife, Kelly, and I have been reading picture books to them since they were in incubators.

“The staff at Craigavon Area Hospital’s neonatal unit, who were absolutely brilliant, advised us that reading to the girls in their incubators could aid their development.

“Of course, that’s what we did – and it seemed to help. The girls fought hard and raced through the various milestones they needed to achieve in order for us to be able to take them home: breathing without assistance, progressing from being tube-fed milk, regulating their temperature without the aid of the incubator, and putting on weight.

“They came home with us just before the start of Euro 2016 and, from that summer onwards, they have enjoyed watching football when it’s on the TV. Time will tell how long that remains the case!

“Given their fledgling interest in football and their love of picture books, I got the idea to combine those two things and write World At Your Feet.”

Rob was also keen to make sure the book would appeal to football fans of all ages, and straddled the line between art book and children’s book. That seems to be the case, with World At Your Feet getting glowing reviews from those who have already bought it.

Rob revealed: “I’m getting messages and photos by email and on social media from parents saying how much they and their kids have enjoyed the book.

“Since writing it, a lot of hard work has gone into the practicalities of publishing a book, so to receive such positive feedback has made it all worthwhile.”

You can buy World At Your Feet from www.worldatyourfeet.co or Amazon.