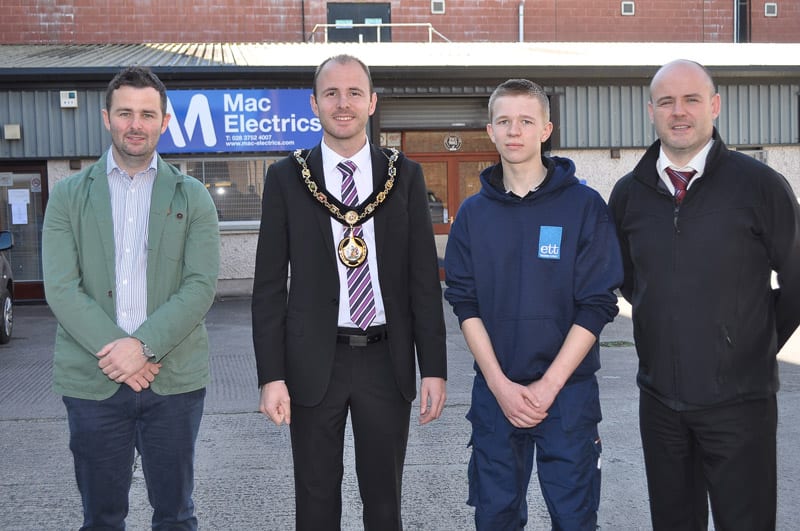 Lord Mayor, Darryn Causby, has made sound connections with local electrical contractors as he joined employers in welcoming over 100 newly employed apprentices into the industry.

Around 30 of the 2015 apprentice electricians will be attending the industries own training facilities based at the Armagh Business Centre, Loughgall Road.

Now entering its second year, the up to date training facilities are run exclusively for electrical contractors by Northern Ireland’s Electrical Training Trust (ETT). The trust was formed in 1998 as a charitable organisation and since then has helped train over 4500 electricians. The organisation remains firmly committed to promoting traditional, employer-led electrical apprenticeship training to school leavers and other young people. Philip McBirney (MAC Electrics) took the opportunity to explain to Lord Mayor Darryn Causby the important part that apprenticeship training played in the development and success of the business since its establishment in 1985. Currently celebrating 30 years of successful trading, MAC Electrics have further marked the milestone achievement by welcoming Matthew Gibson as the latest addition to the Armagh based team

The Lord Mayor joined employers in welcoming the bumper intake of new apprentices. He went on to commend the efforts of local employers in doing their bit to boost real employment opportunities for young people in the districts around Armagh, Banbridge, Craigavon and further afield.

During the visit, the Lord Mayor observed some of the technical skills and training techniques that have helped produce high quality, well paid jobs in the local community. Most of these young people will help fill the skills gap that has opened up in the local economy over the past decade. Some however, will be bound for major projects in the Republic of Ireland, Scotland and England where the demand for Northern Ireland talent and productivity remains high.

Commenting on behalf of ETT Chris Walker (Centre Manager) said “the Lord Mayor’s visit has clearly provided welcomed encouragement to these young people, as they endeavour to launch out on their chosen career path”.