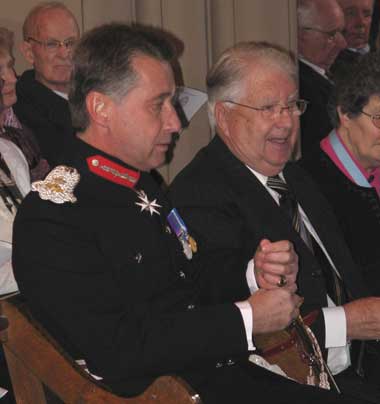 The Lord Lieutenant of County Armagh, Earl Caledon (pictured left), has been made a Knight Commander of the Victorian Order (KCVO) in the Queen’s New Year’s Honours List.

The 59-year-old Nicholas James Alexander, who has been the Lord Lieutenant for the past 25 years, lives at Caledon Estate.

And Dame Mary Elizabeth Peters, is recognised again for services to sport and to the community in Northern Ireland.

The Province’s only ever Olympic gold medal winner is made a Companion of Honour, an exclusive title held by a select group only, including Her Majesty The Queen and just 65 others.

For services to the community in Armagh, Andrew Cornett Clint is awarded the British Empire Medal.

He is the current chairman of the Armagh Police Voluntary Welfare Group.

Awarded an OBE is Patricia Majella Cunningham, leader, Dominican, of the Orana Preschool in Newry. It is in recognition of Mrs Cunningham’s services to preschool education.