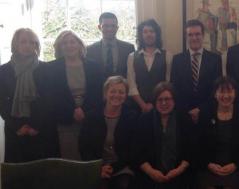 A delegation from the city’s legal practices has met with local councillors today (Thursday) – with the proposed closure of Armagh Courthouse high on the agenda.

Significant issues impacting the sector were raised, including Justice Minister David Ford’s proposal to axe the iconic court and relocate business between Newry and Craigavon.

Armagh City and District Councillor Garath Keating slammed the Minster’s proposal, saying it was beyond contemplation why he would seek to include Armagh among the court facilities to be axed.

He told Armagh I: “Armagh Courthouse is a facility which is a great asset to the local legal industry, the community and the overall justice system here.

“The idea of closing it as a cost saving exercise is a complete nonsense and a false economy. The paltry savings being suggested by David Ford pale in comparison to the inconvenience, and potentially of much greater seriousness, the denial of access to justice, for local people, that such a closure would have on our population.

“The building itself has huge importance to the locality and the fabric of Armagh City. The prospect of another grand listed building lying dormant in the city does not bear thinking about, especially so when there is a huge demand for exactly the type of facility it offers.

“This building, which the Justice Department has spent considerable sums on over this past few years in modernising into a state of the art courthouse, should be occupying the Minster’s mind, working out how to  best maximise the use of the facility, rather than how he can try and justify boarding it up.

“This is a purpose built historic building. It is not at all suited to an alternative use compared to other buildings in the north’s Justice estate, which could easily be sold or redesigned at a gain to the Department, rather than creating another hugely expense to maintain empty space here in this city.”

In appealing for local people to respond to the current consultation, Cllr Keating added: “This Minister is totally blinded by a short sighted desire to save a quick buck for his departmental budget, with no regard for the financial or social impact his actions will have for our community.

“Local court users, the legal profession and people who do not want to see a further removal of key public services from this city should take the opportunity available to voice their concerns and feelings on this important and symbolic issue.

“Minister Ford’s approach on this issue mirrors the simplistic approach to budgetary pressures he has taken with respect to Legal Aid. His slicing and dicing management of that aspect of his budget is also totally unacceptable.

“Instead of trying to find efficiencies and working with the legal profession and experts to engineer sensible reforms and savings, his current agenda of chop now consider later, risks severely undermining the integrity of the local justice system.

“It threatens the availability of legal services and proper access to justice for many thousands of vulnerable individuals and families and is a potential hammer blow to many local legal practices which work tirelessly to provide an excellent service to people often in times of considerable distress.”