Kingsmills Massacre 40 years on: I want to see ‘truth and justice’ 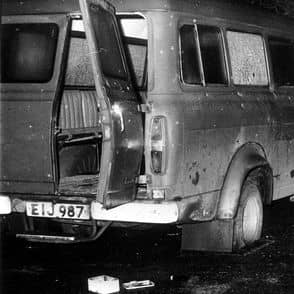 On this day, 40 years ago, 10 innocent Protestant workmen were shot dead in cold blood by the IRA.

Eleven men were taken out and lined up against the minibus in which they were travelling in at the time and butchered with bullets; Alan Black was a sole survivor.

The 5th of January 1976 will be forever remembered as one of Northern Ireland’s darkest days.

And now, Mr Black, 40 years on, has called for the massacre “never to be forgotten”. Relatives of the Kingsmills Massacre victims stand outside Government Buildings in Dublin prior to their meeting with Taoiseach, Enda Kenny on Thursday, September 13, 2012. Picture: Conor Greenan

“I want to know is why was it done; who did it; and what did they think it would do for their cause?” he told Belfast Live.

“It was brutal what was inflicted on us. Ten completely innocent men taken out and brutally murdered.

“This time of year, I go into countdown mode — I look at the calendar and at the clock and think to myself ‘the boys have only five days or five hours or five minutes to live’, right up to the time of the ambush.

“On a nice summer’s day it is like it happened to someone else in a different life but when the winter sets in and the dark nights come round it feels like it just happened yesterday.

“But, I want to see a bit of truth and justice. For the boys, but mostly for the families who are still searching for the truth.”

These brutal slayings came just a day after six Catholics were shot and killed by the UVF in two separate incidents in county Armagh.

The Reaveys and O’Dowd families – living within 15 miles of each other in county Armagh – each lost three loved ones at the hands of the infamous Glenanne Gang.

Brothers Declan, 19, and Barry O’Dowd, 24, and their uncle Joe, 61, were shot dead at a family gathering in Ballydougan, near Gilford.

The attack took place only minutes after brothers Anthony, 17, Brian, 22, and John Martin Reavey, 24, were shot at their home near Whitecross. Brian and John Martin were killed instantly while Anthony died weeks later.

“I don’t hold out much hope anyone will ever be brought to justice,” said Noel O’Dowd – brother of Declan and Barry – as he spoke to the Belfast Telegraph.

“We have always known there was security force involvement in it – where was it sanctioned and why?”