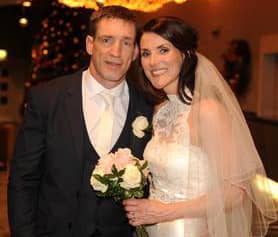 Surrounded by over 300 friends and family, which included former Finance Minister Charlie McCreevy, the All-Ireland winner married Maura O’Rahilly at an “intimate ceremony” in St Brendan’s Church in Clogher.

Maura, from Knockeen in Castleisland, Co Kerry, is the sister of Ruairi O’Rahilly, a former Kerry footballer and teacher at CBS Tralee.

The newly married couple’s reception was held in the Malton Hotel in Killarney.

“They had been dating a long time and the church was where his bride was baptised. They played Christmas carols during the service,” local parish priest Fr Pat Crean-Lynch told the Irish Independent.

“There was a full church and a very big wedding.

“There were a lot of footballers from Armagh and Kildare. John Doyle from Kildare was there, Paul McGrane, a former Armagh player, was Kieran’s best man.”

McGeeney captained Armagh to the 2002 All-Ireland Senior Football Championship, their only title. He was Kildare manager until last September.

He now combines his role as Armagh football selector with a place on the Tipperary hurling backroom team.