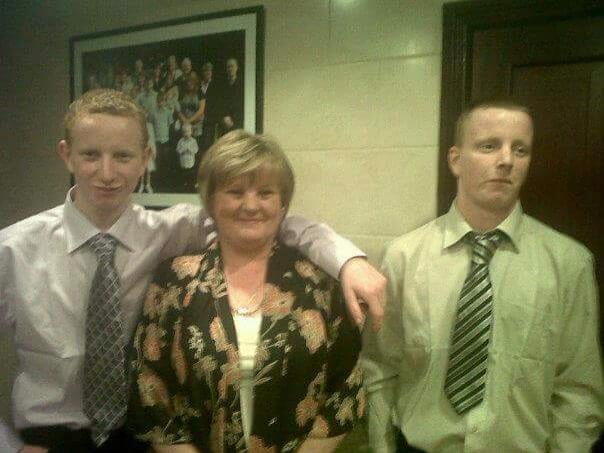 A Keady woman has revealed the moment she discovered she had just won a whopping £10,000 on a £10 scratch card.

Patricia Shortt was actually hiding in her daughter’s bathroom at the time, so as not to reveal the fact she had just spent another tenner on a single scratch card.

The mother of 15, and grandmother to ten, laughed: “I was in my daughter’s house at the time and she would have given off to me about spending £10 on a scratch card so I went into the bathroom and scratched in there. I was trying to hide it from her.

“I was in so much shock. I kept looking at it thinking there was something wrong with my eyes, then I came running out of the bathroom and got my ones to check it, then ran into a niece of mine next door and she read it over three times. Then my son’s girlfriend read it over three times – the back of it, the whole thing to make sure all was right.”

She added: “We then went over to Rices [the supermarket where the ticket was bought] and they put it through the machine to check it was a winner and luckily it was. It didn’t say the amount. My son’s girlfriend then rang up on the Sunday morning and they said to go into Armagh where I collected the winnings.” After all the furore and messages of congratulations, Patricia is going to take stock and let the dust settle before deciding what to do with her winnings.

“I really don’t think it has sank in yet. I am still in shock. I have the money in the bank now but I want to get my head settled before I plan anything.

“I will go to Medjugorje though. I have always wanted to go back there but I could never see myself getting the money but there I have it.”

She added: “I have fifteen children and no doubt they’ll all be looking some too.”

And the result has been welcomed by Rices Supermarket too, as Patricia says, since winning, they “haven’t stopped selling scratch cards, everyone is buying them”.

All in all, you can’t beat a good news story.