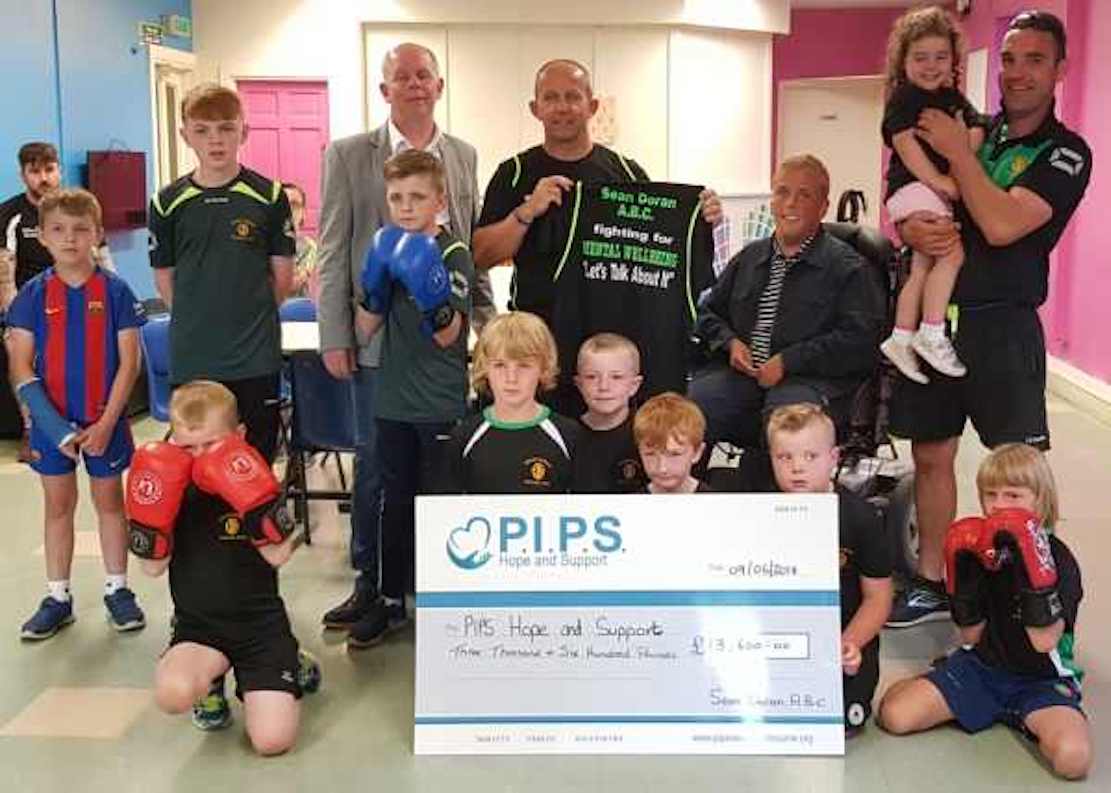 A series of fundraisers saw Sean Doran Boxing Club in Keady raise an incredible total of £3,600 for PIPS.

PIPS Hope and Support is a leading independent advocate within the Southern Region and offers suicide prevention services and support for individuals, families and communities.

PIPS Hope and Support rely profoundly on fundraising where all funds raised are disbursed locally to assist and support people with issues relating to suicide, self-harm or mental and emotional wellbeing and provides education and training programmes to people on how they can help reduce the risk of suicide and increase their mental wellbeing in our larger community.

Sean Doran ABC as a club, unquestionably wanted to undertake a number of initiatives to raise awareness around Mental Health and as a collective, chose PIPS Hope and Support as their beneficiary.

The first of their fundraisers took place on Monday, May 7 when a total of six teams of men and women built up of 30+ members undertook the challenge of Belfast City Marathon as part of a relay team.

Following this, the club’s junior members, parents and friends with the support and assistance of the Keady Recreation Centre and Armagh senior gaelic footballers organised a fun-run and built up a volume of 245 mile.

On completion, the club raised an incredible total of £3600, which will go directly to supporting the work of PIPS Hope and Support.

Chris Fullerton, Head Coach of Sean Doran ABC expressed gratitude to all club members and the wider community for supporting their initiatives.

“As a local club, we are absolutely delighted to be able to present PIPS Hope and Support with £3600.00 towards the vital service they are providing to individuals, families and communities when it is needed most,” said Mr Fullerton.

He added: “Sean Doran ABC wanted to raise awareness around Mental Health, in today’s society, mental health is affecting many individuals within local communities and indeed the sporting community.

“We as a club wanted to raise the much-needed awareness required for individuals to know Sean Doran ABC are here to support them and their well-being.

“Myself and the management of Sean Doran ABC want to pay particular thanks to all our members who participated in the events to raise awareness and funds, Armagh Senior GAA, the local Community and Premier Promotions who donated the teams with our Marathon t-shirts.”

“Everyone at PIPS Hope and Support thank the management, the club members, their families, the local community and all who took part in Sean Doran ABCs fundraising initiatives. The club have been influential in raising awareness of mental health and positive well-being within their sporting community.

“We were absolutely delighted to be the beneficiary of the fantastic £3600.00 raised by all involved. The funds this exciting and effective club has raised will allow PIPS Hope and Support to continue delivering our vital service to individuals, families and communities in the Southern Region Area.

“All funds raised for PIPS Hope and Support allows us to continue providing a service to support people with issues relating to suicide, mental & emotional well-being and trauma as well as providing education programmes to people on how they can help reduce the risk of suicide in our greater community.

“Everyone at PIPS Hope and Support are appreciative of Sean Doran ABC, their club members, supporters and wish them every success in their development”.