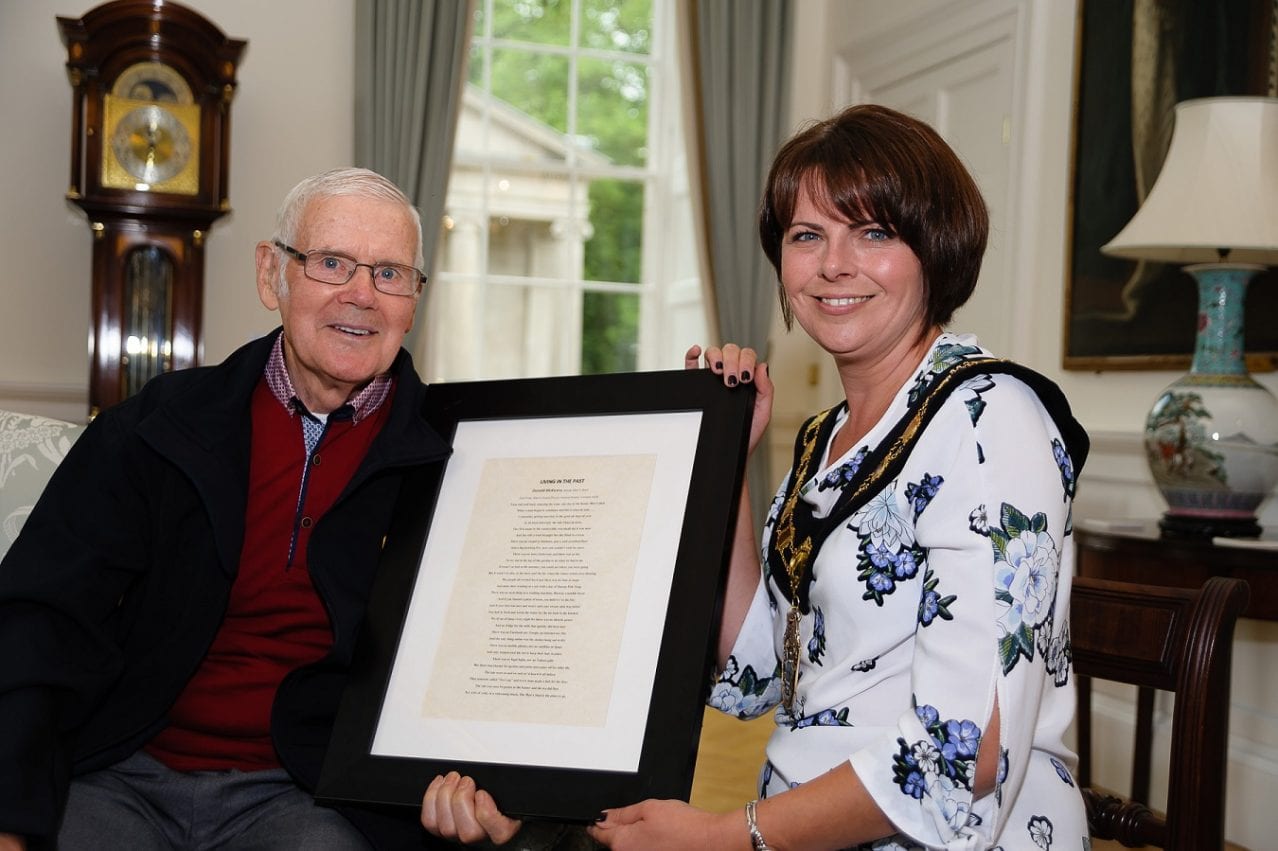 Lord Mayor of Armagh City, Banbridge and Craigavon, Councillor Julie Flaherty was delighted to welcome Mr Donald McKenna and members of Keady Men’s Shed to The Palace, Armagh to congratulate Mr McKenna on placing 2nd overall at the first ever Men’s Shed Poetry contest which was organised by Poetry Ireland and the Men’s Sheds Associations.

Keady has been making its mark on the map of late.

From record-breaking dances to prize-winning poetry, the south Armagh town has been firing on all cylinders!

And a special reception has been held in Armagh – hosted by Lord Mayor Julie Flaherty – to celebrate the achievements of Donald McKenna, a member of Keady Men’s Shed.

The contest attracted entries from dozens of sheds, drawn from 13 counties throughout Ireland.

The onerous task of selecting the winners fell to acclaimed poet, author and playwright Dermot Bolger.

“This competition gave me a true feel for the great sense of companionship and bonding which men feel with these unique spaces. So many poems explored these feelings of support and camaraderie that it was a difficult task to pick out winners”, said Dermot.

Second place overall went to Keady Men’s Shed member Donald McKenna, who caught Dermot’s eye with a lively and amusing composition entitled ‘Living in the Past’.

“It juxtaposed two worlds and different times so that, after conjuring up the here-and-now companionship of the shed, it then deftly launches us back into a tour-de-force description of a vanished way of life – told not just with nostalgia but with wonderful flashes of sharp wit,” said Dermot.

Donald is well-placed to evoke the spirit of decades past, having been born in 1929.

At 89 years of age, he is one of men’s sheds movement’s elder statesmen, and an immensely popular fixture at his home shed.

Keady Men’s Shed was established in 2016 and offers a friendly and welcoming environment for older men from across the Keady and District area. Men’s sheds are autonomous, community-run spaces where men of all ages and backgrounds share skills, collaborate on projects and work together within their communities.

Lord Mayor Julie Flaherty was thrilled to welcome the members to the Palace and congratulate Donald personally.

She said: “It was a delight to meet Donald, his family members and the members of Keady Men’s Shed – all great characters and especially Donald who read out his second prize winning poem for me.

“I must say in my opinion he definitely should have won the competition!”

Living in the Past

I was laid well back, enjoying the craic, one day in the Keady Men’s shed

I remember getting married, in the good ole days of yore

So sit back and enjoy the tale I have in store.

Our first home in the countryside, was small but it was neat

And the wife a total stranger but she fitted in a treat.

There was no carpet or linoleum, just a well-scrubbed floor

And a big torching fire, sure you couldn’t wish for more

So we ran to the top of the garden to do what we had to do.

It wasn’t so bad in the summer, you could see where you were going

But it wasn’t so nice, in the snow and the ice, when the winter winds were blowing

And done their washing in a tub with a bar of Queens Pale Soap.

There was no such thing as a washing machine, likewise a tumble dryer

And if you fancied a piece of toast, you held it o’re the fire

You had to fetch and warm the water for the tin bath in the kitchen.

And no fridge for the milk that quickly did turn sour

There was no Facebook nor Google, no internet nor Sky

There was no mobile phones, nor no satellites in Space

And only women used the net to keep their hair in place.

There was no legal highs, nor no Valium pills

For a bit of craic, in a welcoming shack, The Men’s Shed is the place to go.

The Men’s Shed make a wide variety of products that are on sale to the general public.  If you would like to support Keady Men’s Shed, they have a shop open at Unit 6, Annvale Industrial Estate, Keady, which is open every Friday and Saturday morning, and the shed is open every Wednesday 10.30am – 2.30pm.  For more information contact Oliver on 07849 489334. This project was developed and funded through the PHA’s Good Neighbourhoods for Ageing Well Programme.