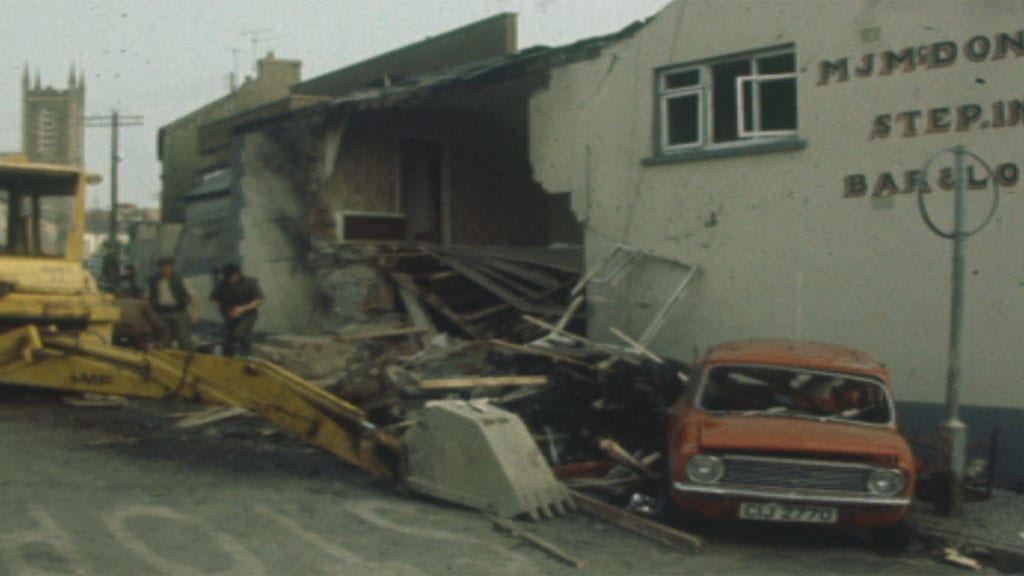 A Judicial Review into a series of killings linked to the notorious Glenanne gang in east Tyrone and Armagh during the 1970s is to begin today.

The gang are accused of murdering SDLP branch secretary, Denis Mullen, who was shot at the front door of his family home in Collegeland in 1975 and Betty McDonald, who was killed in an attack at a bar in Keady in the summer of 1976.

The Glenanne gang are said to have murdered more than 120 people between 1972 and 1976, which the families say involved police and government collusion. Betty McDonald was murdered in Keady in 1976

A spokesperson for the Pat Finucane Centre, said: “The families bereaved in this series of tragic events have already endured the loss of their relatives, followed by over three decades of official lies.

“Many of the bereaved are elderly and cannot wait indefinitely for truth, acknowledgement and the apology they deserve for the heartache and trauma caused by state collusion.

“Today’s application for a Judicial Review (in which London barrister Danny Friedman, QC, is acting for KRW Law) also asks for a ruling that British government has breached and continues to be in breach of Article 2 of the European Convention on Human Rights (the Right to Life).

“This arises from its past illegal and covert actions and its continuing failure to ensure an independent thematic report into a state policy of collusion between loyalist paramilitaries, the RUC and the UDR in the murders of 120+ people.

“These events are chronicled in the PFC/JFF publication “Lethal Allies” (Mercier Press, October 2013) which was written (in part) on the basis of official reports drawn up by a specific unit within the PSNI’s Historical Enquiries Team (HET) and on previously declassified documents in the British and Irish national archives.

“The HET unit which investigated these murders was deliberately staffed exclusively by former police officers who had no previous involvement with either the RUC or PSNI. An affidavit supplied to the court by its Senior Investigative Officer confirms that 80% of the work required to complete the thematic report was finished before it was peremptorily halted.

“The bereaved families were repeatedly promised an over-arching review of the murders in order to put their loss into context. They patiently waited but were finally left disappointed as the promise was never fulfilled. “The British government has, to date, failed to respond either to the HET reports on collusion or to ‘Lethal Allies’ despite repeated requests for private meetings. This silence is unacceptable.

“Many of the families have cases pending with the Office of the Police Ombudsman for Northern Ireland while others are taking civil legal action against the Chief Constable of the PSNI (as the inheritor of corporate responsibility for the RUC) and the British Ministry of Defence. These cases will continue whatever the outcome of today’s legal action.”

“This morning’s decision will allow the challenge into the delay in completing an investigation into the murder of 13-year-old Patrick Barnard on St Patrick’s Day 1976 to proceed,” he said.

“Patrick was one of four people killed at the Hillcrest Bar in Dungannon by a murder gang, run by British military intelligence services during the 1970s.

“My colleague, Mid Ulster MP Francie Molloy, attended the High Court this morning in support of the victims of this British murder gang, which was made up of members of the RUC, UDR and loyalists and which was run by British military intelligence.

“The so-called Glenanne Gang was responsible for more than 100 murders, mainly nationalist civilians, in counties Armagh and Tyrone, as well as being involved in the Dublin/Monaghan bombings.

“The inquiry into the activities of this British murder gang has effectively been closed down. The state is once again seeking to delay the truth about the central and pivotal role of its armed forces in running murder gangs over the period of the conflict.

“The campaign of murder waged and directed by members of the British forces against nationalist and Catholic communities has been well-documented.

“It’s unacceptable that the state continues to refuse to take responsibility for its actions and in doing so only adds to the pain and the anguish of the victims.

“Today’s High Court decision is another step towards exposing the truth about the activities of this murder gang and to compelling the British government to take responsibility for the actions of its forces.”