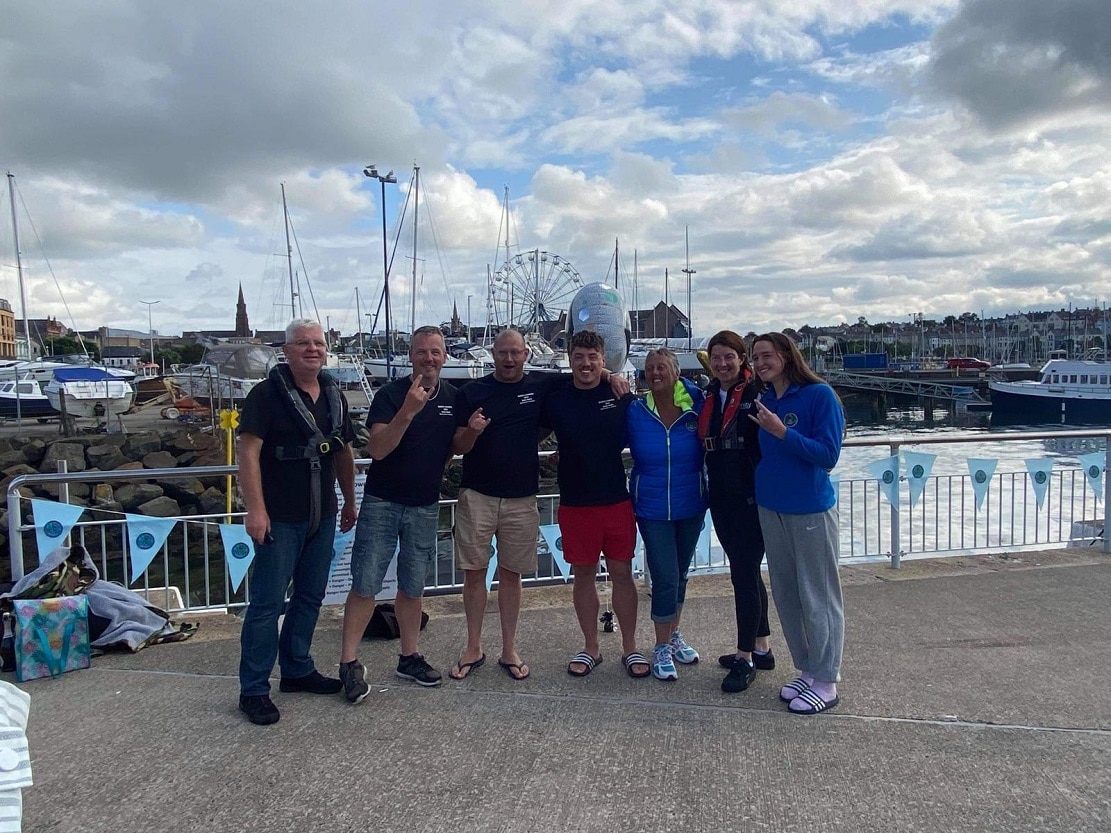 A Portadown man has set a new world record for swimming the North Channel on his first attempt.

Jordan Leckey (29) left Donaghadee at 6.45am yesterday (Monday) and completed the 36km swim to Portpatrick, near Stranraer in Scotland, in an incredible 9 hours, 9 minutes and 30 seconds.

He smashed the previous record which was set back in 2013 by an American woman at 9 hours 37 mins.

“The stars just aligned for me,” the Whitesides Hill man told Armagh I. “The first two hours were  probably the hardest mentally. You are getting used to how bitterly cold it is and I had so many doubts. I really thought I wasn’t going to be able to do it.

“You look up and you see Scotland but it’s so far away. When I got there, I was so exhausted I could barely stand up but I waved to everybody on the boat and they shouted over then that it was a new world record. They were buzzing for me.

“When you are in the water you have no concept of time or distance. I thought I had been in the water for about eleven-and-a-half hours.” Jordan, who works as a lifeguard at South Lake Leisure Centre and is a member of open water swimming group the Lough Neagh Monster Dunkers, had trained for the swim in Lough Neagh.

Among those on the boat which travelled alongside him for the duration of the challenge were Monster Dunker founders Chris Judge and Dorothy Johnston.

Chris set a world record himself in June when he was part of a group which swam 72 miles across St George’s Channel from Ireland to Wales.

Dorothy, meanwhile, coached Jordan from he was 1o years old and a member of Lurgan Amateur Swimming Club.

Jordan’s dad John was also on board keeping him going with words of encouragement while mum Linda, brother Matthew, girlfriend Jamie-Lee, sister-in-law Aisling and nephew and niece Freddie and Peyton were gunning for him from dry land.

Jordan says he has been overwhelmed by the support, not just from the open water swimming community but from people in general.

Members of the Chunky Dunkers open water group, based in Donaghadee, stood on the edge with torches to guide him at the start, while hundreds of others tracked his swim throughout the day.

Jordan has previously competed in the Global Swim Series – swims around the world where participants accrue points – and in 2019/20 won the wetsuit category, doing around 20 swims in Ireland and countries such as France and Morocco.

He is already thinking of his next challenge and is considering the Triple Crown for Ireland, which consists of the North Channel, Galway Bay and the Fastnet Swim in Cork.

The Oceans Seven is also on his radar and “a big, big commitment” as it is worldwide and can take people years to achieve.

“This is just the start,” he added.

In the meantime, Jordan is taking a day or two to recover. “I can’t move my hands. My forearms have completely seized up,” he said.

“I was meant to be back in work today but they have always been very understanding when it comes to my swimming.”