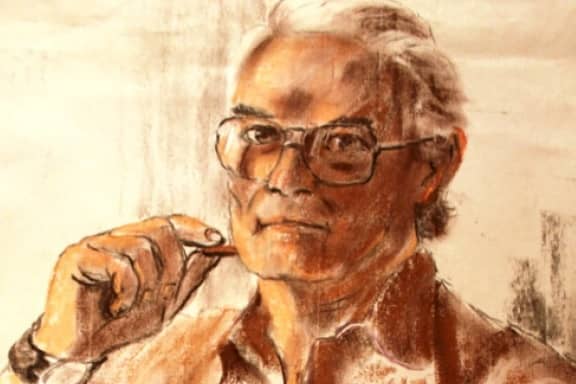 A painting by the late Armagh artist Jackie Connolly – gifted to Armagh Council shortly before his sad passing in October – will take pride of place in the new Tommy Makem Community and Arts Centre in Keady.

It was a magnificent gesture by John – ‘Jackie’ – Connolly, a hugely talented and much-sought after local artist, who passed away on October 25, after an illness, at Craigavon Area Hospital.

Jackie, from Drumbreda Park in Armagh, was 85 years of age.

Tributes were paid at a meeting of Armagh Council, when it was revealed the generous gift had been made, ensuring the work of one of this district’s most distinguished figures will be displayed, for all to enjoy, in a state-of-the-art venue dedicated to the memory of another, the legendary musician, Tommy Makem.

SDLP Cllr Thomas O’Hanlon, speaking at the meeting, referred to the amazing paintings by local artist Brian Vallely which were on display throughout the Palace building.

But he said that when you mentioned local artists, many people quite rightly also spoke of Jackie Connolly and his work.

He revealed he had met with Mr Connolly a number of times in the preceding months and the artist had sent word, through his family, that before his death he wished to gift to the council a painting of Tommy Makem for display in the new Community and Arts Centre in Keady.

Mr O’Hanlon advised that, just before his sad passing, the magnificent picture had been handed over.

It was hoped that this would be put on display in the Foyer of the new community centre in Keady when completed.

Also paying tribute to the late artist at the meeting, Lord Mayor Cathy Rafferty had asked that a letter of sympathy should be sent to his family.

She said she had been brought up in Drumbreda, beside the Connolly family, and Jackie had always taken an interest in anyone, particularly young people, with an interest in art and encouraged and assisted them where possible.

Lord Mayor Rafferty described Jackie as  “a real gentleman and his death was a real loss to the community”.

On behalf of her party, DUP Councillor Freda Donnelly had also conveyed sympathy to the Connolly family.

And Ulster Unionist Councillor Sylvia McRoberts said she had known Jackie Connolly for many years, describing him as “a very talented artist and a gentleman to everyone he met”.

She said his death would be a big loss to the city and district, but it was good and right that examples of his work were on display in many places throughout Armagh.