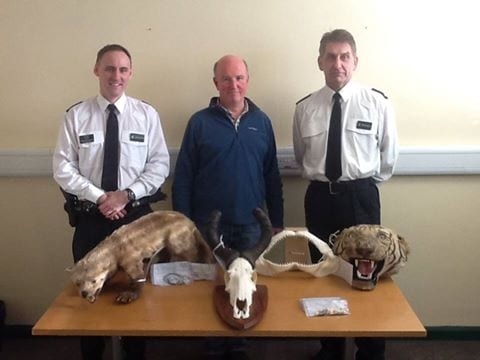 PSNI in Craigavon have put on show some of the items seized during operations relating to the import, export, sale and distribution of endangered species.

The items were seized in Co Armagh today with assistance from the PSNI Wildlife Liaison Unit, the National Crime Agency and the Scottish Wildlife Criminal Investigation Unit.

Police in Craigavon took to Facebook this evening and posted the photograph, reporting that officers from Lurgan Neighbourhood Policing Team had been assisted in this multi-agency operation.

The search was conducted in relation to the import, export, sale and distribution of species protected by the Control of Trade in Endangered Species regulations 1997.

A number of items were seized and the PSNI says that enquiries are ongoing.