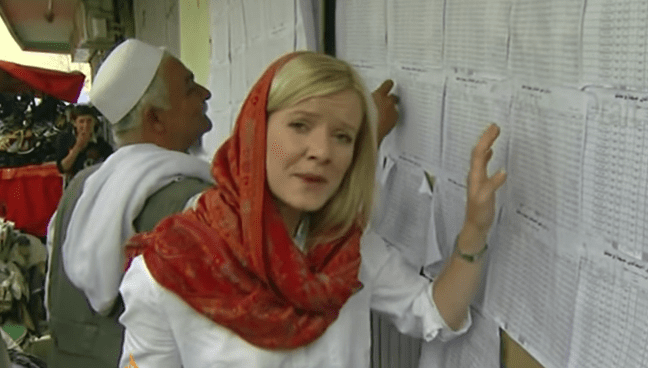 A County Armagh-born journalist has won one of the most coveted journalism awards in the world.

Jane Ferguson, originally from Markethill, has been named in the George Polk Awards.

She has picked up the award for ‘Foreign Television Reporting’.

Jane, who works as special correspondent for the American PBS NewsHour, said she was “deeply honoured” at the recognition.

The award is for her work in “depicting the extent of civilian famine and death in war-torn northern Yemen”.

Jane has thanked the Polk Awards, distributed by Long Island University, for “supporting journalism from Yemen” and everyone at PBS NewsHour who had “helped me make this happen”.

She graduated in the late 2000s, when journalism jobs were scarce, and grasped freelance opportunities in the Middle East and worked for CNN and Al Jazeera English.

Jane’s work has taken her to many war-torn regions, including Beirut, and now Yemen.

The George Polk Awards recognise reporting across all media and “focuses on the intrepid, bold, and influential work of the reporters themselves, placing a premium on investigative work that is original, resourceful, and thought-provoking”.

The awards were announced at a press conference and panel in Washington DC today (Tuesday).

According to Long Island University, Jane Ferguson won the Foreign Television Reporting award for her “graphic reports portraying victims of the humanitarian disaster resulting from the proxy war fought between forces allied with Saudi Arabia and Iran in Houthi-controlled northern Yemen”.

The citation added: “Ferguson flew into southern Yemen and slipped away from Saudi authorities who had barred reporters from going north.

“Garbed in Yemeni woman’s attire to avoid detection, she crossed areas dominated by Al Qaeda fighters to reach places where famine and disease were taking their highest toll in what she characterized as the weaponization of hunger as a tool of war in her PBS dispatches as well as a New Yorker Magazine essay.”

The awards are named for George Polk, whose body was found in May 1948. He turned up floating in a bay, hands and feet bound, shot at point-blank range in the head, murdered when he had been covering the civil war in Greece between the authoritarian government and the communists.

All Jane’s colleagues, past and present, will join in congratulating the County Armagh woman on her tremendous achievement and recogniyion.

Certainly, she is in very good company and follows some of the world’s most famous names.

Past Polk Award include Seymour Hersh, Walter Cronkite, Thomas Friedman, and the teams of Woodward and Bernstein and Barlett and Steele.