Inspirational Leigha celebrated at US Awards! 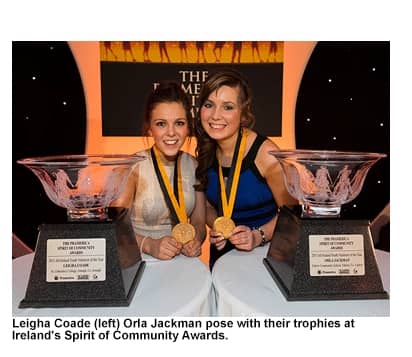 AN Armagh teenager who was named Ireland’s youth volunteer of the year for her unrivalled and selfless acts has been celebrated for her hard work and commitment at a special community awards ceremony in Washington at the weekend.

Seventeen-year-old Leigha Coade (pictured left) – a student of St Catherine’s College in Armagh – along with Orla Jackman (15), from Tullow in County Carlow, was recognised at the 18th annual presentation of the Prudential Spirit of Community Awards.

During the event awards were presented to more than 100 outstanding youth volunteers from around the world, including Leigha and Orla, who, at the end of March, were named Ireland’s two youth volunteers of the year in the annual Pramerica Spirit of Community Awards.

The recognition came during the seventh annual Pramerica Spirit of Community Awards gala in Kilkenny. Each received engraved gold medallions, €1,000 for charities of their choice and an all-expenses paid trip to the United States, which they enjoyed at the weekend, joining other top youth volunteers from around the globe.

Leigha and Orla were among 20 finalists from the Republic of Ireland and Northern Ireland honoured in March. The other finalists received a personal award of €500 and an engraved silver medallion, presented by media personality, author and clinical psychologist David Coleman.

“Ireland can be proud of its young people,” said Mr Coleman. “These teenagers have both inspired and impressed me. I congratulate Orla and Leigha on their achievements and wish them well in their future paths in life. I have no doubt they will inspire others to volunteer and will leave a legacy of altruism in the communities they have served.”

Pramerica Systems Ireland sponsors the Pramerica Spirit of Community programme in partnership with the National Association of Principals and Deputy Principals (NAPD) and the General Teaching Council for Northern Ireland (GTCNI). The programme, introduced seven years ago, encourages youth volunteerism throughout Ireland, and identifies and rewards young role models.

Caroline Faulkner, senior managing director and chief information officer at Pramerica, said: “Students such as Orla and Leigha are the future of Ireland. Their leadership skills know no bounds, but more than that, they have a deep sense of community which is what our country needs. It is my honour to congratulate them and all the finalists on their achievements.”

Last autumn, application forms for the awards programme were distributed to post-primary schools. In February, finalists were selected based on motivation, service, impact, commitment and challenge. During March, they received Certificates of Achievement at their schools by officials of Pramerica, NAPD and GTCNI and received further recognition at the gala dinner in March, before Leigha and Orla travelled for their visit to Washington.

Leigha Coade,  a Year-13 student, volunteers as a reading buddy to help build confidence and improve literacy in younger children. She is also a Pastoral Prefect and a member of the Volunteer School Ethos Committee.

Outside of St Catherine’s College, Leigha organised several charity fundraising events, including a sponsored shave at Armagh Harps for Northern Ireland Cancer Research which raised £2,200, and a coffee morning at Antrim Golf Club for the MSA Trust, a support and information service for people with multiple system atrophy.

She also volunteers every Saturday at the Armagh St Vincent de Paul shop as a shop assistant.

Leigha has cystic fibrosis and regularly volunteers for the Cystic Fibrosis Foundation, a charity close to her heart. Chosen as an Olympic Torch Bearer in June 2012, she has since brought her torch to schools, hospitals and nursing homes.

St Catherine’s College principal Deirdre McDonald paid tribute, saying: “Leigha is an extremely courageous and generous young woman. She is committed to working to transform the community she lives in for the better and works tirelessly to this end.”

Ireland’s other volunteer of the year award winner, Orla Jackman is a third-year student at Tullow Community School, and has dedicated herself to raising awareness and funding for childhood cancer. She established a committee called Crosslow Fundraisers in October 2010 and it has raised more than €40,000 for childhood cancer.

Orla was diagnosed with leukaemia in December 2009 and is motivated by her personal experience with childhood cancer. She is on the Crumlin’s Children’s Hospital Youth Advisory Council and her contribution helps ensure a child’s perspective of the hospital and how it operates.

Orla was instrumental in producing a brochure on the drug Cytarabine – a chemotherapy drug that can be administered at home so children don’t have to visit the hospital as often for treatments.

“Even though we are in a recession, I am overwhelmed by people’s generosity,” says Orla.

Everyone will rightly agree that both Leigha and Orla are an inspiration to us all!