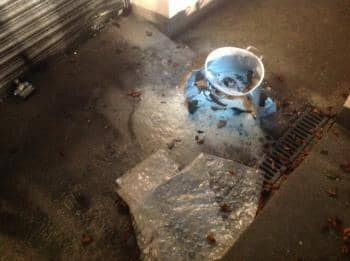 A device – thought to be a homemade explosive, partially exploded outside an Orange hall in Keady, county Armagh

The device was left at the front door of Carnagh Orange hall on the Castleblayney Road last night.

A shutter was damaged at the property and there were no casualties.

The police said they were investigating reports that a small device may have partially exploded at the hall.

The Orange Order’s grand master Edward Stevenson tweeted saying the “moronic actions of those behind the bomb attack at Carnagh Orange hall must be universally condemned”.

“Orangeism will not be intimidated,” he said.

The moronic actions of those behind the bomb attack at Carnagh Orange hall must be universally condemned. Orangeism will not be intimidated

Sinn Féin MLA Cathal Boylan said there could be no justification for attacks on Carnagh or on any Orange halls and called for them to end.

“Those responsible have absolutely nothing to offer society and need to call an immediate halt to their actions,” he said.

Danny Kennedy, Ulster Unionist MLA for Newry & Armagh, said: “I totally condemn this cowardly attack on Carnagh Orange Hall and its members. The members of the lodge have worked tirelessly as an integral part of the local community, and despite repeated sectarian attacks on their premises will continue to do so.

“I understand that a crude explosive device was used, and the hall has sustained minimal damage. This attack was also designed to intimidate the lodge members. However they will not bow down to intimidation and are determined that they will proceed with the charity events which they have planned for next weekend.

“It’s time for the sectarian bigots who attacked Carnagh Orange Hall to get off the backs of the local community. I would appeal to anyone who may have seen any suspicious activity in the area to contact the police and share any information they have.”