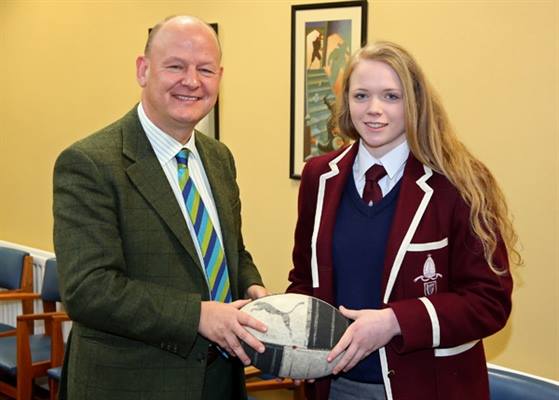 City of Armagh U18 captain, Vicky represented Ulster U18s for the last two years, and this year helped her Province remain unbeaten in the Interprovincial series.

At local level she has captained her ever growing club side with distinction.

Mr Paul Crute, Head Master at Royal School Armagh said: “The Royal is delighted to celebrate the sporting successes of our pupils and to honour their achievements. We offer a broad range of sports including rugby for our girls who play in the Girls’ Rugby Schools Cup. Vicky is an outstanding sportswoman.

“Encouraged by her coaches Zoe Templeton and Neil Rafferty, she had a trial for Ulster Ladies U18 team as soon as she was eligible at the age of 15 and was already good enough to be selected. She plays at centre and has represented Ulster on all 6 occasions. Her intelligence, speed strength and agility make her a formidable opponent.

“The maroon and cream honours blazer in school is awarded to Sixth Form students who have achieved significant recognition in major activities. Vicky makes history by being the first girl in the schools’ 406 year history (the school became co-educational in 1986) to be awarded one!”

Neil Rafferty, U18 Girls Head Coach at City of Armagh Rugby Club commented: “Vicky is one of an exceptional group of young women playing at Under 18 level in Armagh RFC. We are very proud to be coaching them all but for Vicky to be honoured by The Royal School in this way is a fantastic recognition of her achievement. I’ve no doubt she will play for Ulster and Ireland in the years to come.”

Shirley Anne Donaldson, Senior Vice President of City of Armagh Rugby Club and manager of Women’s Rugby at Armagh was delighted to hear that Under 18 player, Vicky Irwin, has been the first female in the history of the Royal School Armagh to be awarded with an honours blazer for rugby.

Shirley Anne said: “Vicky has been a credit to her sport both on and off the pitch and has now represented Ulster U18s for two seasons. Significantly last season Ulster were unbeaten in their interprovincial matches. I commend the Royal for its recognition of Vicky’s outstanding talent and hope she will be the first of many rugby Honours Blazer holders.”