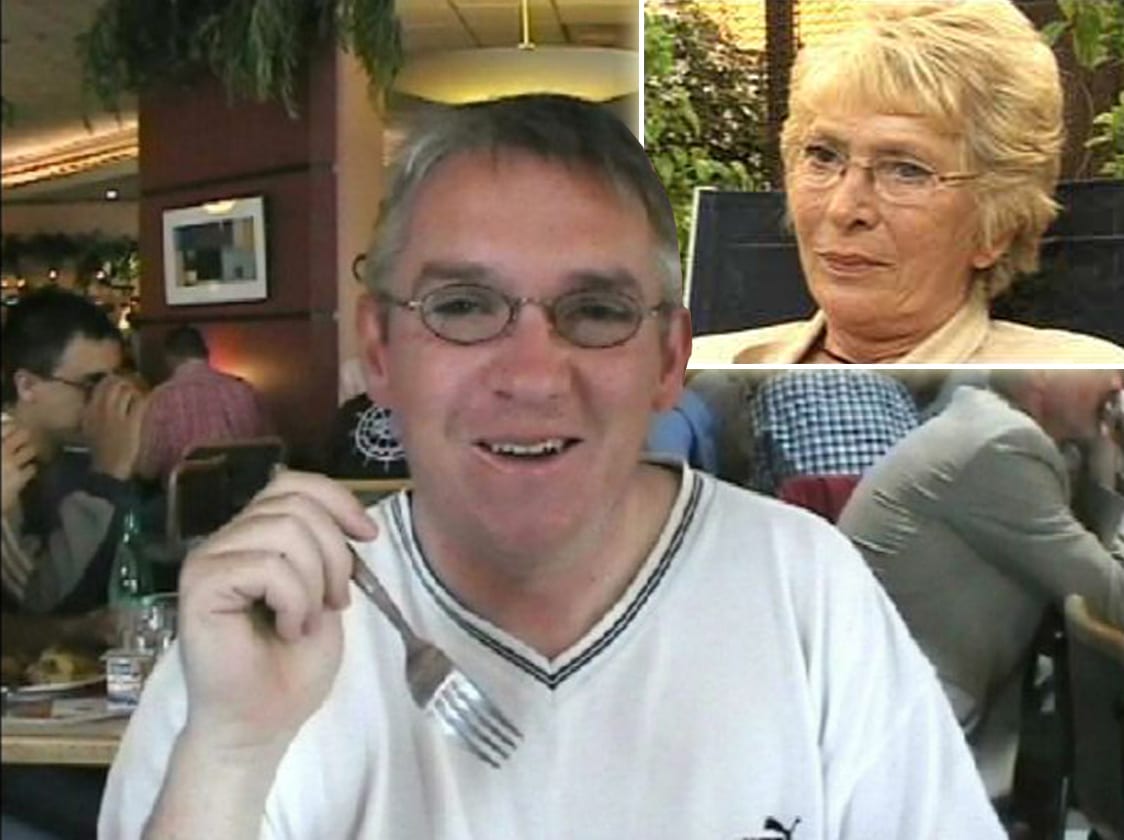 The heartbroken mother of Paul Crymble has died – 10 years after she watched her only son’s wife Jacqueline convicted of his brutal murder.

Shirley Crymble – who was praised for her bravery for speaking out at the trial – passed away earlier today at Antrim Area Hospital.

She was at Armagh Crown Court this same week 10 years ago to see justice served after delivering her own courageous testimony which helped put her son’s killers behind bars.

Thirty-five-year-old Jacqueline, together with her lover Roger Ferguson, 31, were both convicted of the Father’s Day murder in June 2004.

The cold and calculated killing sent shockwaves across the entire country.

Paul, the father-of-two young children, was discovered in the boot of his own car in a laneway off the main Markethill to Portadown Road by a local farmer.

The 35-year-old had been murdered at the family home at Ballybreagh Road in Ahorey and abandoned there.

Earlier that evening, all three had been socialising in Richhill.

Crymble claimed that masked men demanding money and drugs broke into the family home later and attacked her husband and kidnapped him, while she herself was tied up.

Mr Crymble had been suffocated.

The jury took just three-and-a-half hours to return guilty verdicts on both accused after a trial which lasted four months. A subsequent appeal failed to overturn the conviction.

In June 2007, Jacqueline Crymble was jailed for 20 years, with Roger Ferguson for at least 18.

It was Shirley Crymble’s heartbreaking testimony which helped secure the cold-hearted killers’ conviction.

She later revealed she continued to “pray for their salvation”.

Trial Judge Mr Justice McLaughlin said the pair had acted to make financial gain and to “remove the major obstacle to a future comfortable life together”.

He held up and praised Mrs Crymble, who had also been predeceased by her husband Norman and daughter, Julie, and now the incredible loss of her son, Paul.

Mr Justice McLaughlin said: “His mother, Shirley, has lost her last surviving child having already lost her daughter in tragic circumstances and has borne these losses in addition to the death of her husband.

“The death of Paul has caused her to suffer intense grief and in her victim impact statement she explained in detail how her life has been ruined by his murder, particularly because it occurred partly at the hands of his wife.

“She is a lady of remarkable courage and immense dignity who gave evidence at the trial with care and balance and impressed into awed silence the entire courtroom when she spoke.

“I accept her statement without hesitation.”

Mrs Crymble passed away peacefully earlier today and her funeral will take place at the Church of the Nazarene, at Oakfield Drive in Carrickfergus, at 1.30pm on Monday.

It is afterwards, at the same Carnmoney East Cemetery where her son Paul was buried, that Shirley Crymble will now be laid to rest.