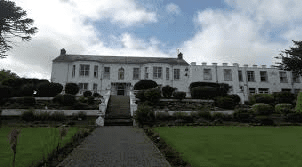 Health Minister Jim Wells today praised the work being carried out at the Cuan Mhuire , Newry, which has for decades been helping those suffering from addiction and other related issues.

It is a registered charity and has its own programme, developed by Sr Consilio and her staff over the last 40 years, which understands the challenges faced by alcoholics and addicts as they struggle to get clean and sober.

The Minister said: “I just want to formally place on record today my thanks for the good work undertaken by Cuan Mhuire, and various other community and voluntary sector organisations around Northern Ireland, supporting us to prevent and address the harm caused by substance misuse.

“Alcohol and drug misuse continue to place a strain on our already over-stretched health service. Worryingly, in 2013, provisional figures show that 236 people died directly as a result of alcohol misuse with a further 115 deaths related to drugs.

“These figures are too high.

“We all have a responsibility to address the issues surrounding alcohol and drug misuse whether from a personal or familial point of view. Please do not be afraid to ask for help for yourself or even on behalf of a friend or a loved one. Support is readily available from the health service and in the community and voluntary sector.”

During the visit the Minister planted a tree in the campus to reflect Cuan Mhuire’s mission to promote healing and growth.

The Minister continued: “Addiction can have a devastating effect on not only the individual directly but on their families and friends as well. Too many lives have been lost to addiction and many a family broken by it.

“I would like to take this opportunity to pay tribute to Sister Consilio, and all the staff and volunteers at Cuan Mhuire, for their unwavering spirit, determination and commitment to this issue.”

Sr Consilio is the Founder of Cuan Mhuire, a network of support and rehabilitation centres with bases both in Northern Ireland and the Republic of Ireland. It offers an abstinence-based residential programme to people suffering from alcohol, other chemical dependencies and gambling.

In 1984, the Cuan Mhuire Centre in Newry was opened.

Today, 30 years later, it provides support and care to people and their families from all over Northern Ireland as they face the challenge to get sober and clean from their addictions.