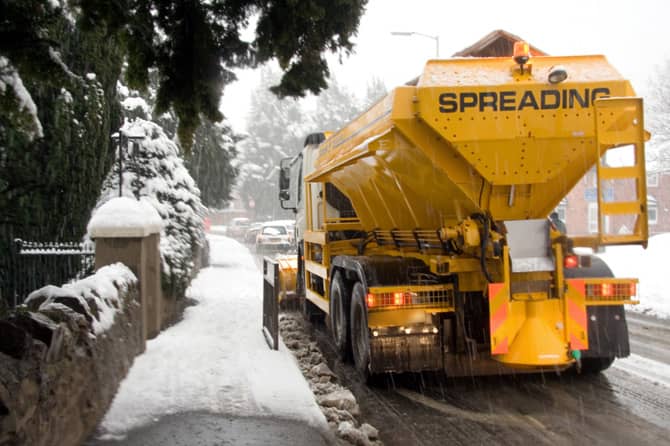 Thirty-five gritters and 84 staff will be on standby from tonight (Wednesday) across the Southern Division.

TransportNI officials have this morning unveiled their winter management plans, revealing that the arrangements will allow for the “main network” to be salted in just over three hours.

And the plans will remain in place from this evening until the middle of next April.

According to Simon Richardson, the Department for Regional Development’s Southern Divisional Manager, the arrangements will allow all “main roads” in the area to be salted, as he advised motorists to take extra care while driving as winter approaches.

He said: “Salt barns have been filled to maximum capacity in Southern Division, which encompasses the council areas of Armagh, Banbridge, Craigavon, Down, North Down, Newtownards, and Newry and Mourne.

“When ice or snow is forecast, we have 35 gritters available which can salt the main network in just over three hours, a massive logistical exercise that costs around £22,000 each time it takes place.

“It is impossible to say with any certainty what this winter might bring, but after some of the severe weather conditions we have experienced in the last five years, we have worked to improve and invest in our services so that we are well prepared.”

During periods of prolonged snow, all gritters will be fitted with snow ploughs and efforts directed to clearing snow from motorways and the trunk roads, before moving to other main roads and the busiest urban link roads.

Mr Richardson continued: “The operation will continue until all roads are cleared, but this may take some time, even with all resources deployed. In very deep snow, TransportNI will use its snow blowers, the latest of which can shift 1,600 tonnes of snow an hour.”

Arrangements are also in place to enlist the help of contractors, including farmers, to clear blocked roads and TransportNI has introduced enhanced communication arrangements and priority secondary salting to rural schools – some 50 in all across the Province – that are most affected by wintry weather conditions.

“Heavy snowfalls, such as those experienced in recent winters, highlighted the essential role farmers, agricultural contractors and other plant operators played in helping to clear the roads for the public,” added Mr Richardson.

“During these events, many people voluntarily helped out and their assistance was greatly appreciated. With their help, many roads blocked by snow were cleared and able to be used by the emergency services, utilities and the public.”

In relation to the gritting of main footpaths in council areas, the divisional manager said: “I am very pleased with the progress made in this area, with all councils now working with TransportNI to deliver this service.

“TransportNI will continue to provide salt bins and grit piles at strategic locations, for use on a self-help basis, to help prevent the formation of snow and ice on pavements and untreated roads – and will be continually replenishing these during the winter.”

TransportNI says it will try to ensure that motorists are kept fully up to date with road conditions at this time of year.

Information on salting activities is relayed electronically to the media to ensure the latest news on road conditions is available to motorists. This information is also relayed to the Trafficwatch NI website – www.trafficwatchni.com/home – to ensure the public are kept appraised of the winter service operations.

But Mr Richardson warned: “Even with the most careful and thorough planning, the use of special Met Office forecasts and the latest ice prediction technology, winter service is really a battle against the elements and ice-free roads cannot be guaranteed.

“Motorists have to play their part by taking extra care during wintry conditions. The best advice is in the Highway Code – drive with care even if roads have been salted, be prepared for road conditions changing over short distances and take care when overtaking gritters.”

The public are also being advised to prepare for winter and commercial property owners in particular should make sure that they have adequate supplies of salt in place to ensure the safety of employees and visitors.

The TransportNI Winter Service Information Leaflet ‘Keeping Traffic on the Move During Winter’ is available online at www.drdni.gov.uk/index/roadsni-3.htm or by calling 028 9054 0540.

Roads Minister Danny Kennedy explained that across the Province as a whole, almost 300 staff and 120 gritters will be on standby to ensure the main roads are gritted and help drivers cope with wintry conditions.

He said: “A large number of these gritters have been replaced this season to improve the reliability in this important service. Salt barns and stockpiles have also been filled to capacity and TransportNI is now holding stocks of almost 110,000 tonnes of salt.

“It is impossible to say with any certainty what this winter might bring, but after some of the severe weather conditions we have experienced in the last five years we have worked to improve and invest in our services so that we are well prepared.”

The roll-out of the winter service operation involves salting around 7,000 kilometres of main roads in just over three hours, across Northern Ireland, at a cost of approximately £80,000 per night.