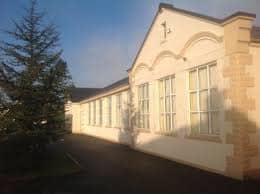 The former play park at Darkley in Co Armagh is to be leased to a local GAA club, Armagh I can reveal.

And at a recent meeting of Armagh City and District Council’s executive committee, council clerk and chief executive said the proposal should be seen as part of planned regeneration of the village, which also included ambitious plans for the forest there.

The request was approved on the basis that an alternative site was found for a new play park. The club, at the time, were hoping to extend the school pitch so that it is adequate for senior competitive football.

In 2011, the adjacent Darkley Primary School (pictured) agreed to the council’s request to relocate the play provision for Darkley area onto the school site.

The SELB have subsequently agreed to permit the development subject to the council entering into a licence agreement.

The decision to resite the play park releases the previous site for disposal, as per the agreement given by council in 2009 to lease the site to the club for a period of 25 years at an annual rent of £300.

The club hopes to proceed with the legal process as soon as possible in order that the necessary development work is started.

The remains of the old play park still exists and the club has asked that the ‘hardfill’ is removed – at an approximate cost of £7,000 – prior to handover.

The council has agreed to continue to discuss play alternatives on the school site, to  finalise and update lease agreements with Phelim Bradys GFC and to carry out the essential works to enable a quick handover of the site.

Local SDLP Councillor Thomas O’Hanlon has welcomed the proposal, as has SF Councillor Mary Doyle, who said the current facility was not fit for purpose.